Una Mullally: Referendum shows us there is no Middle Ireland, just Ireland

‘The fiction of Ireland as a conservative, dogmatically Catholic country has been shattered’

Early tallies indicate that the exit polls are accurate and a strong Yes vote will win the referendum. 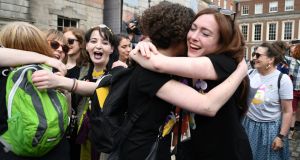 Supporters gather at Dublin Castle to await the final results of the referendum to repeal the Eighth amendment. Photograph: Jeff J Mitchell/Getty Images

The handover period is over. The fiction of Ireland as a conservative, dogmatically Catholic country has been shattered. The past is left back there, and a new legacy is being created. A legacy of compassion, empathy, and maturity - a country taking responsibility for the care and health of women and girls. What happened in the referendum vote was seismic, but more seismic still was the realisation that this vote was reflecting change, not just instigating it. “They listened to us. They actually listened to us,” a young woman said to me, crying, in the RDS on Saturday morning.

Together For Yes ran an excellent campaign, from start to finish. As the No campaign scraped the barrel, the Yes campaign always acted with dignity, with facts to the fore, and never once stooped. Together For Yes built an army around the country. An army of Us. In the RDS, people burst into tears when the Together For Yes bosses came into the room.

For many, Ailbhe Smyth’s determination and calmness has been a source of great inspiration for decades. During the campaign she wore herself down so much that she struggled to walk in the final days. Meanwhile, female journalists from competing newspapers hugged each other when they spotted one another. Mary Lou McDonald was cheered by Labour party members, Simon Harris was cheered by people from Sinn Féin. This was a feminist movement; non-partisan, grassroots, non-hierarchical where possible. We were all Together For Yes.

There are thousands of stories from this referendum. It would be impossible for the media to catch them all, but the profound misunderstanding of this as a movement is notable for both media and politicians. There was, and remains, justified discontent amongst Yes campaigners, canvassers, and supporters, about how various sectors of the media patronised this long-standing, hugely significant movement, and viewed the issue though a conservative, party-political-focussed, and it has to be said, male, lens. In April, a senior campaigner told me, “I’m tired of being told how to suck eggs.” Political commentators did not seem to understand the vast array of activist experience individuals brought to this campaign, nor the legacy of the marriage equality referendum which trained many canvassers and organisers for this battle. This is an existential issue for the Irish media, which needs to reflect on a disconnect that is pronounced.

We were told this was a divisive campaign. It was a unifying campaign. We were told this was a difficult issue for people, yet for many it was straightforward. We were told it was the third rail of Irish politics, so instead, the people led, from the activists and protestors to the canvassers and ordinary women and men who rolled up their sleeves, to the Citizen’s Assembly, to the women who shared their abortion stories. We were told about Middle Ireland. There is no Middle Ireland. Just Ireland. Its islands, villages, cities, towns, coasts, midlands, mountains, estates, flats, and fields. This campaign was intergenerational. Younger activists stood on the shoulders of those gone before them, and brought an energy, fearlessness, creativity and sense of unrelenting determination and optimism that inspired people across the board. The brilliantly eclectic make-up of the campaign brought in doctors, mothers, lawyers, students, trade unionists, the LGBT community, feminists, and everyone in between.

Who did the No campaign really have in the end, apart from a cabal of fringe fundamentalists whom no one can really understand how or why they have gained such a platform and unfettered access to the media? The No campaign drove recklessly and ended in a car crash. They alienated undecided voters at every juncture with extreme messaging. In the final weeks, the No campaign acted as an asset to the Yes campaign, with spokesman John McGuirk, who revelled in bizarre statements, and campaigners such as Ronan Mullen getting short shrift, particularly when he disrespected a woman who shared her abortion story in a television debate. No amount of media training could connect No campaigners with the public.

So what does this all mean? I bumped into the theatre-maker Grace Dyas in the RDS, “Today I feel accepted, loved, cherished.” This wasn’t just about abortion. It was about women feeling equal and valued, liberated and supported. “We did it,” everyone kept saying. “Landslide,” was the most repeated word. “Secrecy is not the same as private. Secrecy is toxic. Private is mature and grown up,” one campaigner said in the hotel across the road from the RDS. No more. No more secrecy, no more shame, no more stigma, only support, kindness, and care.