Taoiseach lays wreath for peacekeeping soldiers who have died 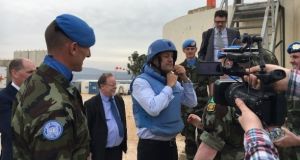 Mr Varadkar laid a wreath to commemorate the peacekeeping soldiers who have died on the United Nations mission since it began in 1978, before flying by helicopter to the outpost where Irish soldiers are currently stationed.

At the outpost, which patrols the Blue Line that separates Lebanon and Israel, Mr Varakdar received a guard of honour, before being taken for a tour of the camp and witnessing a riot containment training exercise that included Lebanese, Irish and Finish forces.

Taoiseach Leo Varadkar lays a wreath in Lebanon to honour all UN peacekeepers who have died in service pic.twitter.com/ua6UZGF8ct

The UN post is primarily served by IrishFinBat (Irish and Finish Battalion), and has 11 local villages in its area of operation.

Later Mr Varadkar will travel to Tibnin, to visit a memorial erected to commemorate the 47 Irish peacekeepers who have lost their lives serving in Lebanon. The memorial is close to a previous UN outpost stationed by Irish soldiers, and there is a strong link between local community and the Irish personnel.

Mr Varadkar is travelling alongside Minister for State with responsibility for defence Paul Kehoe, and Vice Admiral Mark Mellet, chief of staff of the Defence Forces, and Sean O’Regan, Ambassador to Egypt.

There are currently around 380 Irish Defence Forces personnel serving on the Unifil mission in Lebanon, alongside troops from Finland and Estonia.