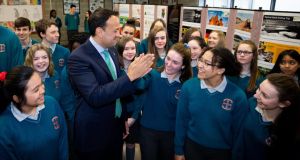 This is the worst Irish Times/Ipsos MRBI opinion poll that Leo Varadkar has endured since he became Taoiseach in June 2017.

The fall in the Fine Gael vote – by three points to 30 per cent – is not, of itself, enormous. But it is not negligible, either. It plants Fine Gael on 30 per cent – well ahead of its old rivals in Fianna Fáil, but far, far away from the mid-30s to which the party both aspires and knows would secure it the leadership of the next Government.

But it is the decline is Varadkar’s personal rating that will perhaps worry Fine Gael most of all. It slumps by eight points today, significant in anyone’s language. This follows falls in the previous two polls as well; since the beginning of last year, Varadkar has lost more than a quarter of his satisfaction rating.

In an age that is hyper-sceptical about its political leaders, their novelty fades quickly

Now, granted, then it was at a whopping 60 per cent – reminiscent of the sort of ratings that his predecessor Bertie Ahern used to shrug at in the years of his pomp. Varadkar’s fall to Earth has perhaps been predictable. In an age that is hyper-sceptical about its political leaders, their novelty fades quickly.

Previous Irish Times research, conducted long before Varadkar was Taoiseach but when he was very definitely on voters’ political radar, showed that many people thought he was different to other politicians – almost not a politician at all. That sense almost certainly contributed to his popularity. But it was never going to last. Once you’ve been Taoiseach for a while voters will understand that, actually, you are a politician, after all.

There is a wider, related point, about the advantages and disadvantages of power. Government confers the ultimate political advantage – the power of action, the ability, intermittently at least, to make the political weather, to command the political agenda.

But that’s a double-edged sword. As well as all that, Government also has responsibility for what happens, and what doesn’t happen. Governments, bluntly, get blamed for things.

That is what we have seen in recent weeks. That is what has most likely driven the decline for leader, Government and party.

For Fine Gaelers pondering the next election – and they all are – a very important question now presents itself: can their leader recapture the imagination of voters during an election campaign, or is he now forever just another politician trying to sell a message? The answer to that question may hold the key to the election. What really matters, after all, is not where the polls are: it’s where they’re going.

The other standout result from the poll is the decline in Sinn Féin support – and the accompanying slump in Mary Lou McDonald’s satisfaction rating, down by seven points from 40 per cent to 33 per cent.

This follows an intense period of drum-banging by Sinn Féin on various issues from Brexit to housing to the children’s hospital – to no avail, at least as judged by these numbers. The second part of McDonald’s first year has been much more difficult than the first part.

With no obvious route to government – the goal that she identified even before she became leader – it’s hard to see where McDonald’s second year is going.

Fianna Fáil is a few points away from fierce competition with Fine Gael, a boost the party can reasonably hope for – if not bank on – through its extensive party machine and lists of locally dug-in candidates, especially in rural areas, where Fine Gael is becoming increasingly jumpy.

Yes, Fianna Fáil is treading water in this poll, with party support and Micheál Martin’s satisfaction rating both falling slightly, within the margin of error. But it will take encouragement from Fine Gael’s discomfort.

So if Fine Gael and Sinn Féin are dropping support, and Fianna Fáil isn’t picking up, where are the votes going?

Mostly to the “Independents and others” – the archipelago of political micro-states that comprise the fourth pillar of Irish electoral politics. Labour picks up two points, the first encouragement for a long time for Brendan Howlin, but Independents and small parties are up five points to 19, their highest score since 2016, the year some of them entered Government.

Though big national polls are not the best vehicle for measuring support for small parties and the Independents, the breakdown of the figures suggest that the increase in support has not gone to the recognisable groups – the Independent Alliance, the Greens, the Social Democrats, the far-left – instead it is the avowedly non-party and “independent Independents” that have gained.

This suggests that it is dissatisfaction with the big parties, as much as anything else, that is driving the move.