Leo Varadkar sets down markers on which he will be judged 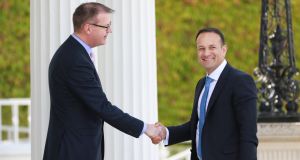 The construction of his Cabinet suggests a cautious side to Leo Varadkar’s approach to managing his Government.

Announcing his nominations in the Dáil on Wednesday night, the new Taoiseach also set a number of clear commitments which his Ministers will pursue. It smacked of a new directness.

The Cabinet survivors, as expected, greatly outnumbered the new arrivals. This was no night of the long knives but it wasn’t quite a night of the butter knives either with Mary Mitchell O’Connor demoted to a super-junior ministry in charge of higher education. She was the most conspicuous loser on the day.

This reflected a feeling widespread in Government that the Cabinet newcomer of last year had not performed well in the jobs portfolio. The higher education sector will be pleased with its elevation to a seat at Cabinet, even if there will be mixed feelings about the minister.

Varadkar’s style has previously been to consult, ruminate and then act with some boldness. On Wednesday, he decided that discretion was the better part of valour, but the line-up marks a dramatic generational change in the leadership of the State. Varadkar, Paschal Donohoe, Simon Coveney, Eoghan Murphy, Simon Harris, Denis Naughten, Joe McHugh, Regina Doherty - not one of them is over 50.

Arguably more significant than the personnel changes, however, was the specific direction of policy and action that was set out by Varadkar.

He committed firmly to a referendum on the Eighth Amendment next year. He indicated that there will be an enlarged programme of building public housing and suggested that there may be measures to encourage landlords to provide housing - a signal perhaps that tax breaks may be employed to encourage rentals.

Interestingly, in the area of health, he charged Harris with formulating a “response” to report of the all-party committee into the future of healthcare, which recently set out a radical and far-reaching plan for the health system, which includes the complete separation of the public and private systems. He did not say that Harris would implement the report. That will be one to watch.

But if Varadkar was direct then he is also setting very obvious markers out by which he can be judged.

It will be clear in a few months if progress is being made on these issues. The housing statistics will tell their own story. The healthcare report will demand a response, and soon. The broadband numbers will be clear. Preparations for a referendum on the Eighth Amendment will be required before too long. All these things will be plainly visible.

To be delivered, they will also require a shot in the arm for a Government apparatus that has become rigid with inactivity in many areas during the long farewell of Enda Kenny and the Fine Gael leadership contest.

There is a change on the way in the Dáil too. Varadkar indicated that Fine Gael will make common cause with Fianna Fáil to end the situation where Independent TDs are hugely overrepresented in the allocation of speaking time.

That will increase the efficiency of a hugely inefficient parliament, but it will also increase the volume of the objections to the rule of the big two.