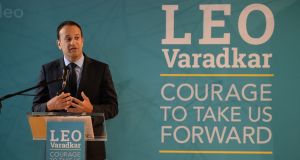 Launching his manifesto for the Fine Gael leadership, he said the Oireachtas would identify key public and security services that would be protected from strikes .

FG leadership tracker: Track the contest and check who your local TD, Senator, MEP and councillor is supporting.

However, this would only happen following a Labour Court recommendation that would be legally binding on staff and employers.

Mr Varadkar mentioned air traffic control as one of the essential public services - as well as transport services such as the Luas - that might be precluded from strike action following a Labour Court recommendation.

He said it could also “include emergency services where it is a matter of life and death”.

Public service trade unions, which were meeting Monday for the start of talks on a new pay deal, said they would oppose any such ban.

The National Bus and Rail Union (NBRU) labelled Mr Varadkar as a “Thatcherite” and questioned whether Fianna Fáil would support his proposal.

NBRU general secretary Dermot O’Leary said the right of a trade union to engage in a trade dispute with an employer would “inevitably lead to counter-measures being adopted by workers”.

“It seems to be that Leo, in his determination to appeal to certain business interests, has decided to set course on an anti-trade union, anti-worker policy.”

“Whilst I am not at all surprised with Leo ‘Thatcher’ Varadkar, I would be amazed and appalled if Fianna Fail , through its supply and confidence arrangement, was to support such a draconian attack on workers in this country”.

The general secretary of the Irish Nurses and Midwives Organisation Liam Doransaid said rhe ban on strikes in essential services would revolutionise the way industrial relations are carried out in Ireland and not for the better.

He said if Mr Varadkar’s proposals became policy, the issue would “become centre stage” and asked what would the Government do if his members decided to reject a Labour Court recommendation.

In another manifesto pledge, he said he would abolish the “help to buy” scheme for first time buyers if it was shown to increase house prices.

Mr Varadkar said he would replace a key policy of his main rival, Minister for Housing Simon Coveney.

The money saved from scrapping the income tax refund would be used to set up a fund to incentivise older people to move out of larger homes.

Mr Varadkar commits to reducing the marginal rate of income tax to 50 per cent and says that public sector pensions should be put on a “more sustainable footing”.

In addition, the Universal Social Charge (USC) would be merged with PRSI to make a new system of social insurance.

On Brexit Mr Varadkar wants a free trade agreement between the EU and Britain.

He says he will seek a special arrangement for Northern Ireland “which will respect the democratic vote of people living in the North”.

“We will argue for Northern Ireland to remain in the Single Market, Common Agricultural Policy, Interreg, Erasmus and other programmes.”

On abortion, he said he would favour abortion in circumstances where the health of the mother was at risks, as well as for fatal foetal abnormalities, but he did not want “abortion on request”.

Mr Varadkar said, however, he did not want his personal views to dictate Government policy, adding that if he was party leader there there would be a free vote in Fine Gael on the issue.