Enda Kenny takes questions on Varadkar’s comments last night to repeal the 8th Amendment. The Minister for Health described the current laws as too restrictive. 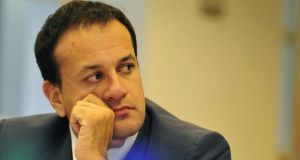 Minister for Health Leo Varadkar: “Leo is very able and very bright but he doesn’t know the meaning of loyalty,” said one of his colleagues. Photograph: Aidan Crawley

The latest demarche from Minister for Health Leo Varadkar is being regarded by some of his Fine Gael ministerial colleagues as a coldly calculated attempt to undermine Enda Kenny’s leadership even though the Taoiseach is prepared to make light of it.

The emergence of a new heart-wringing case has put Mr Varadkar’s comments in context but many colleagues still regard his speech to the Dáil on Tuesday night as an attempt to jump on the bandwagon of popular sentiment to further his leadership ambitions.

Mr Varadkar did let the Taoiseach know in advance that he was going to speak of his unhappiness with the current abortion regime but Mr Kenny was clear yesterday when speaking to journalists that he did not share his Minister’s views.

The Taoiseach did acknowledge that there very sensitive and difficult cases. “I am aware of one at the moment which is very difficult,” he said in an obvious reference to the latest development.

What has really annoyed some senior people in Fine Gael is that Varadkar has reopened the debate on abortion just as the safety of the Christmas break was within touching distance.

The party went through a trauma over legislating for abortion in the summer of 2013 with four TDs and two Senators going overboard and a number of others wavering until the last minute.

When the dust settled, the consensus in the party was that no further moves on abortion would happen in the lifetime of the Coalition.

Varadkar’s declaration in the Dáil on Tuesday night that “it is my considered view that the eighth amendment is too restrictive” has exposed divisions in Fine Gael.

These were not off-the-cuff comments but a carefully worked-out strategy, orchestrated through the media, to get maximum exposure.

“Leo’s leadership ambitions have run away with him and he doesn’t seem to care what damage he does to Fine Gael or the Government,” said one party colleague.

Another way of looking at it is that Varadkar simply spoke his mind, as he did during Alan Shatter’s handling of the penalty points issue. The bottom line is Varadkar’s intervention on penalty points played a role in forcing Shatter out of his job as minister for justice. Some of his colleagues are suspicious he is now intent on doing the same to the Taoiseach.

Since he became a Minister, Varadkar has been cultivating the back benches in a manner reminiscent of Charlie Haughey. His door is open and he is willing to talk to TDs about concerns and constituency requirements.

His strength is while he has established a rapport with the public, he is adept at politics and looking like a leader in waiting. As Minister for Health he has dealt efficiently with the problems facing his department. His public battle to win a bigger budget in the autumn annoyed the Departments of Finance and Public Expenditure but he appears to have gotten his way.

What could stymie his chances of becoming leader is the suspicion in Fine Gael he is possessed of “vaulting ambition which o’erleaps itself”. By action which has the capacity to destabilise Fine Gael, he may have raised doubts in the minds of even his own supporters.