Leo Varadkar ‘glad’ Verona Murphy did not get elected 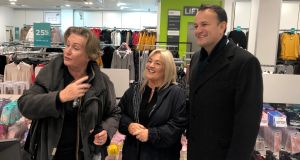 Ms Murphy was deselected as a Fine Gael general election candidate for the constituency this week having become embroiled in controversy over comments she made about immigration during the recent campaign.

She suggested that some asylum seekers may have to be “deprogrammed” and that young children may be manipulated by terrorist group ISIS.

“In terms of Verona herself, quite frankly, I’m glad she didn’t get elected because what we have seen in her recent interviews is that she unfortunately does harbour these views towards migrants,” Mr Varadkar told political correspondents on Friday.

“You know we heard the comment about Wexford Bridge and London Bridge- you know, that is raising the spectre that migration may result in terrorist attacks in Ireland, and that’s just not factual, and is just really inflammatory, I think.”

In an interview on Southeast Radio on Thursday, Ms Murphy said her apology over the comments had been sincere and that it was “absolutely untrue” to suggest they were part of a strategy to pick up on anti-migrant sentiment.

She said the media had distorted what she had said about migrants. “The issue I raised was a security one. We have to protect ourselves.... Do we have to wait for a London Bridge incident on Wexford Bridge?”

Mr Varadkar said that kind of commentary “really feeds into the kind of racist views and xenophobic views that unfortunately are harboured by a lot of people, or at least some people in our society”.

Fine Gael stood by Ms Murphy, president of the Irish Road Haulage Association, during the campaign when she apologised for and withdrew her comments on immigrants. Mr Varadkar, who canvassed with Ms Murphy in Wexford town at the height of the controversy, on Friday said it was “mistake” to select her as a Fine Gael candidate.

“And I accept responsibility for that mistake, she is not somebody who was alien to me, you know, most of us in this room would have known her a bit in someway, in her role as road haulage association president and in her role on Brexit issues in particular, a really impressive life story in terms of how she made somebody of herself and somebody who is very vocal and very outspoken and I thought she would be an addition to our party.

“I never once heard her express anti-migrant views or racist views, I don’t think anyone else did or nobody else told me that they did even though most of us in this room would have encountered her on many occasions.

“And once she did, it came as a surprise- a big surprise- and I have to take responsibility for that.”

The Taoiseach added: “I sincerely hope that other parties, particularly the main Opposition party Fianna Fáil, does something similar instead of accusing of us or the media of all sorts of conspiracies against them, they should act. And they should take people off the ticket who shouldn’t be on the ticket, or at least take some form of action.”

In a statement on Friday night, Ms Murphy hit back at his comments. “It’s a sad day when the full might of the Fine Gael party has today sought to portray commons sense security issues raised by me as racism. “

“The continued and sustained attacks on somebody who is in their eyes a racist is puzzling? Why would they bother? What are they concerned about?

“It is this Fine Gael urban-centric government that are using the race card to detract from the fact that it is failing rural Ireland. All the name calling and abuse hurled in my direction will not conceal this reality.”

Earlier, Minister for Finance Paschal Donohoe defended Fine Gael’s handling of the deselection of Ms Murphy. He said the decision was taken as her views on society were not consistent with the tone and values at the heart of the party.

Mr Donohoe said Ms Murphy had many formidable qualities and acknowledged that when entering politics it could be challenging handling media scrutiny. However, towards the end of the byelection campaign he had begun to wonder about her apology and what her views were.He said that following her deselection, Ms Murphy stood by her earlier opinions.

When asked about the case of Maria Bailey, a Fine Gael TD who will not be standing for the party in the general election, Mr Donohoe said Ms Bailey had lost the support of her local party colleagues in Dún Laoghaire so she could no longer run for Fine Gael.