Speaking ahead of a cabinet meeting to discuss Nphet's recommendation that Ireland move to Level 5 restrictions in order to curb Covid-19 infections, Taoiseach Micheál Martin says that it is the Government's priority to keep schools open. 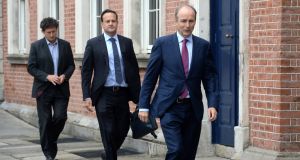 Coalition party leaders will meet today to give detailed consideration to a fresh call from the State’s public health team to increase restrictions to the highest possible level.

The National Public Health Emergency Team (Nphet) has again recommended a move to Level 5 as case levels of Covid-19 continue to deteriorate.

While it has been suggested that Level 5 restrictions could last six weeks, senior Government figures have expressed concern that another lockdown could in fact last much longer, with major economic implications.

Taoiseach Micheál Martin has described the situation as “very serious” while Tánaiste Leo Varadkar warned that a second lockdown would be a lot more difficult than the first. Sources close to Green Party leader Eamon Ryan have indicated that he also has concerns about the economic impact and length of another lockdown.

Nphet is understood to have written to the Government with warnings about what could happen if its advice is not followed. There is a high level of concern among Ministers, however, that the warnings do not take into account other health services or the economy.

Furthermore, the Government believes it can quickly add capacity to hospitals and intensive care units.

There is also understood to be significant reluctance at the highest level of Government to move to Level 5 immediately. Sources close to the top of Government say that the new restrictions introduced recently have not been given a chance to work.

There are also fears that in the event of a Level 5 lockdown, the schools would inevitably close because teachers’ unions would not countenance their members being exposed to the risks of working when most other people are being told to stay at home. Other sources have warned of a huge spike in job losses which would endure until well into next year.

There is a divide in opinion among Ministers, however, around what should happen next.

One said a “big decision” would need to be made this weekend and that it was becoming “harder to hold the line” on the current Level 3 measures that apply. Cavan, Monaghan and Donegal are all currently under Level 4.

Any tightening of restrictions in the rest of the country would result in the closure of many retail services, gyms, and leisure centres.

The three party leaders will meet around lunchtime on Saturday to discuss the implications of the public health advice. It is understood that they will discuss a new exit strategy to set out clearly for the public the pathway by which the State could return to a lower level. This will involve setting targets for what needs to be achieved, a sequence for reopening, details around enforcement, a communications plan and a strategy for pandemic welfare payments.

Separately, there is also growing concern the State’s contact tracing system, a key way of controlling the virus, is being put under pressure.

A further 1,000 cases of Covid-19 and three deaths of people with the coronavirus were announced yesterday by the Department of Health, with people urged to cut social contacts to “an absolute minimum”.

Northern Ireland recorded 1,299 new Covid-19 cases, its highest daily total yet, ahead of the introduction of new restrictions aimed at limiting the spread of the virus. Two more deaths were reported, bringing the official number of fatalities to 608.