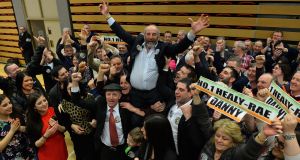 Independent TD Danny Healy-Rae celebrates on the shoulders of supporters including his brother Michael who was re-elected earlier. Photograph: Domnick Walsh/Eye Focus

Mr Ferris and Mr Brassil both failed to reach a quota.

Mr Deenihan, Minister of State for the Diaspora, is the latest high profile party member to lose out.

The strains of “Danny Boy, The Dáil , the Dáil is calling!” rang out across the count centre in Killarney as Danny thanked his wife Eileen, and his daughter Maura played the accordion as the family danced the opening movements of a Kerry set.

Following his exclusion, Mr Spring said Labour should have done something to protect the party. He said he warned his party strategist six months ago the strategy of focusing on “recovery” was wrong.

Recovery was “a macro economic sentiment” and people were not feeling it. It was creating resentment because people felt others were recovering and not them.

A complete recount of 78,000 first preference votes was carried out in Killarney to ascertain correct numbers in the constituency. County Registrar Pádraig Burke denied the re-count had been due to Healy-Rae brothers’ votes becoming mixed up.