Kenny to discuss leadership once ‘Brexit ground rules’ in place

Taoiseach Enda Kenny joined the leaders of the Netherlands and Denmark in the Hague to discuss Britain's exit from the European Union in a sign that the three pro-trade powers plan to coordinate their strategy on Brexit. Video: REUTERS 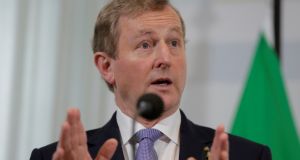 Enda Kenny said the rise of “populist fringe political movements” was the biggest challenge facing Europe today, in a speech at the Hague, the Netherlands. Photograph: Michael Kooren/Reuters

Taoiseach Enda Kenny has said he will make his leadership intentions very clear once he is happy that the “ground rules for Brexit” are in place.

Speaking in the Hague on Friday, he said guidelines for the negotiations around Britain leaving the European Union would be agreed when EU leaders meet in Brussels on April 29th.

Fine Gael TDs are expecting Mr Kenny to make an announcement about his position at the parliamentary party meeting following that summit.

When asked during a press conference in the Hague if he expected to be the taoiseach who congratulated British prime minister Theresa May if she won the British general election in June, Mr Kenny said he always congratulated people on many things.

“I’ve already made my position very clear that once I’m happy with having the ground rules for Brexit in place I’ll make my intentions very clear,” he said.

Later, Mr Kenny said Brexit could unite Ireland, when asked by an 11-year-old boy who had listened to the Taoiseach deliver the 15th Norbert Schmelzer Lecture in the Societeit de Witte.

Mr Kenny thanked Theodore Tweedie, originally from Northern Ireland but living in the Netherlands for nine years, for his question. The boy was with his parents Mark and Angela Tweedie.

“You ask a very simple question which is so profound . . . The answer is yes, but it has to be by consent,” Mr Kenny said, emphasising the terms of the Belfast Agreement. He said Brexit “may change people’s reflections”. It could be that in 10 or 20 years people might have a different opinion and want to vote to have a united Ireland, he said.

Mr Kenny noted that East Germany did not have to apply to join the European Union after the Berlin Wall fell.

He said if people in Northern Ireland decided to change their views, he wanted an understanding that they could join the rest of Ireland in the European Union “seamlessly”, without having to rejoin.

In his lecture, Mr Kenny warned that the rise of “populist fringe political movements” was the biggest challenge facing Europe today.

He said it could not be dismissed by the “political centre” as a passing phase that would diminish with better economic statistics.

“We have to fight the diminution of politics to its being a kind of public amusement or entertainment or some kind of soap opera.

“We now live in a world unfortunately where trivia and trash and frivolousness are gripping people, fascinating them more and more.”

Mr Kenny said the political centre had to “come home” to its values, “reality of life as lived” and begin to engage people again.

He also stressed the importance of Europe and the US working together, and emphasised the requirement to explain the value of the EU to the US.

Carbon emissions in Ireland ‘to drop 9.5% this year’ due to coronavirus slowdown