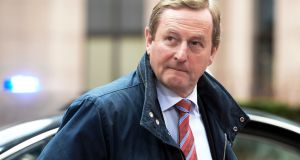 All the indications are that the Dáil will sit tomorrow to re-elect Enda Kenny as Taoiseach, a first for a Fine Gael leader. Photograph: Thierry Charlier/Getty Images

Earlier this week, Enda Kenny gave his riding orders to his negotiating team as they prepared to enter into another day of discussions with Independent TDs. He told them to do everything in their power to finalise a deal this week.

Kenny looks likely to get his wish, and all the indications are that the Dáil will sit tomorrow to re-elect him as Taoiseach. If the Dáil vote takes place tomorrow, it will be 70 days since the general election.

It has been a long time, of course, and the various strands of talks seemed to drag on forever. But we will have a government, unlike in Spain for example, where voters will go to the polls again because their politicians could not assemble a government from the results of a December 20th election.

Kenny will become the first Fine Gael leader to be re-elected Taoiseach and, in another first, the first European leader who oversaw a bailout programme to be re-elected prime minister. Greek and Portuguese premiers have come and gone and Spain’s Mariano Rajoy - a centre-right leader like Kenny - is now heading into those fresh elections.

Fine Gael’s victory will be a slim one and its incoming government precarious, but the party and Kenny are returning to power. Such achievements are built, however, on the oddest of foundations.

As marathon talks between Fine Gael and the Independents continued yesterday, one of the non-party deputies participating in the discussions said the major remaining sticking points were bogs, wind turbines and air ambulances - not quite earth, wind and fire, but close enough.

One government figure standing nearby rolled his eyes and bemoaned the fact that the formation of an administration was being held up by such issues.

Fine Gael significantly increased the pressure on Independents yesterday, and we can expect some TDs to opt-out as today goes on. Others want to refer back to their constituency organisations with a draft deal.

One figure involved in the talks compared yesterday to the final study day before exams, and a request by Fine Gael to hold a Dáil vote on Taoiseach as early as today was rejected.

“I can physically feel time starting to move faster,” the participant said. One Fine Gaeler, while expressing hope the process is coming to its end, said the electorate had not only handed the political system a “bucket of s**t” of a result, but wanted a government from said bucket in relatively short order.

We should see that result over the next 48 hours. Our latest on the talks is here.

Exit Burton, stage left
After initially flirting with the idea of hanging on as Labour leader, Joan Burton now looks set to step aside shortly, as Pat Leahy reports this morning.

Burton’s departure will allow Labour to carry out a proper assessment of the position in which it now finds itself - a small party on the Opposition benches that must work hard to have its voice heard.

In some ways, the water charges deal reached between Fine Gael and Fianna Fáil served as something of a clarifying moment for Labour. The relative ease with which many in its outgoing government partner jettisoned a policy that destroyed Labour caused deep anger.

Alan Kelly’s Dáil speech last week reflected that anger, and party figures say Labour will make the refund of charges to those who paid a key plank of its Opposition politics.

Willie Penrose has even offered free legal advice to anyone who wants to take action against the State on the issue, as Niall O’Connor reported in the Irish Independent this week.

Kelly - who is likely to face Sean Sherlock in a leadership election - was on his feet again yesterday, criticising the wider Fine Gael-Fianna Fáil deal for its lack of detail on climate change.

At this point, it also looks likely that Labour will vote against Kenny when he comes before the Dáil seeking to be returned as Taoiseach. It is a far cry from just a few weeks ago when Kenny, Michael Noonan and other senior Fine Gael figures attempted to press, flatter and cajole Labour back into government.

Fine Gael may be about to find out that former friends can make the worst of enemies, particularly those who know exactly where bodies are buried across the apparatus of government.