Kenny accused of ‘shifty’ tactics in lead up to Callinan departure 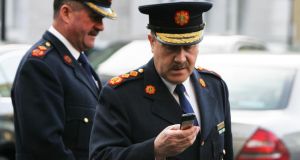 Fianna Fáil has accused the Taoiseach of employing shifty tactics in the period leading up to the retirement of former Garda Commissioner Martin Callinan. Photograph: Cyril Byrne

A motion of no confidence in Taoiseach Enda Kenny is to be tabled by Fianna Fáil later this month when the Dáil resumes. The motion relates to the findings of the interim report by the Fennelly Commission, which examined the departure of former Garda commissioner Martin Callinan.

Sinn Féin has also said it intends to table such a motion.

Fianna Fáil leader Micheal Martin on Wednesday accused the Taoiseach of employing “shifty” tactics in the period leading up to the retirement of Mr Callinan.

Mr Martin said he believed Mr Callinan had no option but to leave his role. He said Mr Kenny had sent Brian Purcell, the then secretary general of the Department of Justice, to meet Mr Callinan at his home late at night to inform him revelations about the taping of phone calls at Garda stations were of grave concern and that he might not be in a position to express confidence in him if asked in the Dáil.

He said this was “shifty” and “underhand” behaviour on the part of Mr Kenny and the event was unprecedented.

The conclusions of the interim report from Mr Justice Nial Fennelly found the events leading up to Mr Callinan’s resignation were “beset by serious information deficits and multiple failures of communication”.

While it accepted Mr Kenny did “not intend to put pressure” on Mr Callinan to retire, it also says it was reasonable for the commissioner to conclude he should consider his position.

Fianna Fáil justice spokesman Niall Collins said the Dáil needed to debate in full all of the events detailed in the Fennelly Report. “It is clear that the response of the Taoiseach to the Fennelly Report is neither credible nor tenable,” he said.

“One issue that stands out very clearly is the level of panic and haste that surrounded the Taoiseach’s actions leading to Martin Callinan’s resignation.”

Tánaiste Joan Burton on Tuesday night said the report made clear “that the ultimate decision to retire lay with the then Garda Commissioner, and that there was no directive issued by the Taoiseach to the Commissioner”.

Mr Martin said this was a very sad reflection of where the Labour Party was and that it was acting as a “mud guard” for Fine Gael.

Sinn Féin leader Gerry Adams said “no amount of spin” by the Government could “disguise the fact that the Callinan debacle has revealed how dysfunctional this Government is”.

“It is clear that the Taoiseach’s deliberate actions led to the resignation of the Garda commissioner. In effect, Commissioner Callinan was sacked,” he said.

Minister for Health Leo Varadkar said the late night visit to Mr Callinan’s house by Mr Purcell was necessary as there was a Cabinet meeting early the following day and Mr Callinan needed to be informed of the situation.

He said Mr Kenny was very concerned about the taping of calls at Garda station and considered it grave and serious situation.

Mr Varadkar said the then commissioner was being given a “heads up” and that the expectation was that he would come back with a response to Mr Kenny’s concerns. It was not a case of constructive dismissal, he added.

The Minister said the justice sector was essentially in crisis at the time with whistleblowing allegations, Mr Callinan’s apparent criticism of the whistleblowers and a Garda Inspectorate report on justice issues all going on.

These events had created a “maelstrom” and it was “not a usual environment”, Mr Varadkar said.

He said there may be inconsistencies when it comes to some aspects of the accounts given to Mr Fennelly in his report but that this happened when accounts were taken from numerous people.

Mr Varadkar said the conclusions were clear and it was not Mr Kenny’s intention to put pressure on Mr Callinan to retire. It was a very difficult time and scenario and new issues emerging very quickly, he said.

Asked about the fact there were no records of the meeting that lead up to Mr Purcell’s visit to Mr Callinan, he replied this was the way business was done. There was no formal record but individuals involved may have kept notes, he said.

Fine Gael had previously criticised the last Fianna Fáil government for not taking notes around the bank guarantee. Asked about this, Mr Varadkar replied that perhaps in future major decisions taken at meetings but not necessarily the content should be covered.

Mr Varadkar said accusations of the Taoiseach attempting to manage the release of the report were not correct. The report had been published once it was cleared by the Attorney General’s office, he added.

Mr Kenny on Tuesday morning said he had read the report and that it had vindicated him. The 300-page report was then published after 5pm and Mr Kenny went on the news less than an hour later to discuss it.

Mr Varadkar said Mr Kenny had made himself available to discuss the issue and would have been criticised had he not.