Opinion: ‘Without Whitaker the proponents of the use of force might have prevailed and this State would have become a very different place’ 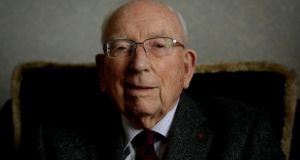 ‘The crisis intensified in early 1969, and on April 21st, a week before Terence O’Neill’s resignation, Ken Whitaker (above) made a remarkable intervention with Charles Haughey.’ Photograph: David Sleator/The Irish Times 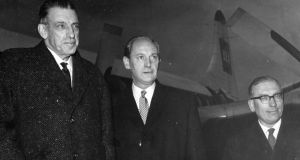 From left, the taoiseach, Sean Lemass, the minister for industry and commerce, Jack Lynch, and TK Whitaker, Secretary of the Department of Finance, in 1964. Photograph: Jimmy McCormack / THE IRISH TIMES .

Ken Whitaker’s role as the architect of Ireland’s socio-economic transformation in the second half of the 20th century has long been recognised. Much less well-known, but no less historically significant is the role he played in the Northern Ireland crisis of 1969, when it threatened the stability of the State.

His engagement with Northern Ireland began in 1965 when he initiated and attended the historic meeting of the taoiseach, Seán Lemass, with Northern Ireland’s prime minister, Terence O’Neill, in Stormont. When Jack Lynch became taoiseach he enlisted Whitaker as his key adviser on Northern Ireland. This testified not only to Whitaker’s outstanding ability and continuing interest in the evolution of Northern Ireland policy but also to a close friendship (nourished by their travelling together, particularly to meetings of the IMF in Washington) since April 1965, when Lynch became minister for finance. Whitaker’s influence on Lynch was immense, arguably for the rest of Lynch’s political career and certainly until 1973. The two men were contemporaries and Whitaker felt he could talk to his new minister (and to his future taoiseach) with total freedom.

The crisis intensified in early 1969, and on April 21st, a week before Terence O’Neill’s resignation, Ken Whitaker made a remarkable intervention with Charles Haughey, the last minister for finance whom he had served as secretary before becoming governor of the Central Bank on March 1st, 1969 (where he retained a roving brief in regard to Northern Ireland at Jack Lynch’s request).

The Haughey-Whitaker relationship in Finance had been edgy at best; a strong-minded secretary who spoke freely did not sit easily with Haughey’s autocratic ministerial style. Whitaker’s urging the advantages of recasting Articles 2 and 3 of the Constitution as an aspirational formula so as to minimise the offence given to Unionists had provoked a vehemently republican response from Haughey: he had no moral objection to the use of force to achieve re-unification; his only objection was that force wouldn’t succeed. In an imperious “personal” letter to Haughey, written with Lynch’s encouragement, Whitaker laid down seven precepts in what amounted to a catechism for Northern Ireland policy. They began:

“(1) Do nothing to inflame situation further, but aim to impress and encourage the moderates on both sides, Catholic and Protestant and

“(2) Avoid playing into the hands of extremists who are manipulating the civil rights movement and who wish to stir up trouble and disorder.”

Haughey did not reply.

But Ken Whitaker’s’s most dramatic intervention in 1969 came against the backdrop of the “Battle of the Bogside” and the first deployment of British troops. Patrick Hillery, the minister for external affairs and Lynch’s closest ally, was on a painting holiday on Achill Island with John Healy (“Backbencher” of The Irish Times) when the crisis erupted and he could not get back for the first emergency Cabinet meeting on August 13th.

When he returned to Dublin Lynch warned him that some of his Cabinet colleagues were “very excited” and Hillery scornfully likened another emergency meeting to “a ballad session in a pub – they were all talking patriotic”. But Lynch came under intense pressure from the Blaney-Boland-Haughey axis when Hillery was in London making representations at the Foreign Office.

On the morning of August 15th, a Garda called at breakfast to Whitaker’s holiday home in Connemara with a message that the Taoiseach wished to contact him urgently. He phoned Lynch from the Garda barracks in Carna and gave him advice, which he summarised in a letter posted that afternoon from Galway city.

The manuscript notes forming the basis of that letter suggest that Whitaker grabbed the first pen to hand and there is a nice symbolism in the first four words, written with a green biro which then gave up the ghost – the rest of Whitaker’s less than green sentiments were written in blue! He warned against the “terrible temptation to be opportunist” and the perils of cashing in on political emotionalism.

But it was not until September 20th, in a speech at Tralee, that Lynch regained control of his government’s Northern Ireland policy. That speech was the work of Ken Whitaker. It reaffirmed the Government’s commitment “to seek the re-unification of the country by peaceful means” and stressed that the policy of reunification through agreement was “a long-term one” which did not seek “to extend the domination of Dublin”.

Within days, Whitaker, en route to Washington for a meeting of the IMF, found himself mediating between Lynch and Hillery, before he delivered his major speech on Northern Ireland to the General Assembly of the United Nations on September 26th. Whitaker had been given a copy of Hillery’s speech before leaving Dublin and he persuaded Lynch to authorise the amendment of some of its more abrasive wording. Whitaker then waylaid Hillery in the lobby of a Fifth Avenue club, where he was taking a swim before going to the UN.

Many years were to pass before the central proposition of Whitaker’s thinking about Northern Ireland ­– that “there is, in fact, no valid alternative to the policy of agreement in Ireland between Irishmen” – commanded general assent. But that should not obscure the significance of the role he played in sustaining the beleaguered taoiseach in 1969.

Without Whitaker the proponents of the use of force might have prevailed and this State would have become a very different place. Ronan Fanning is professor emeritus of modern history in UCD.