Journalist Gemma O’Doherty announces intention to run for the presidency 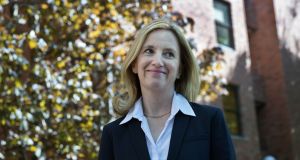 Journalist Gemma O’Doherty has announced her intention to run for the presidency. Photograph: Brenda Fitzsimons

Journalist Gemma O’Doherty has announced her intention to run for the presidency.

In a statement circulated across social media on Sunday evening, Ms O’Doherty said: “As an Irish woman who loves her country to its core but hardly recognises it any more, I am deeply concerned about the unimaginable suffering and chaos so many of our people are subjected to daily.”

In order to secure a presidential election nomination, candidates must secure the backing of four county councils or 20 TDs or Senators to facilitate their entry into the race.

Sinn Féin is planning to nominate its own candidate, while a number of other figures are said to be considering their options including Fianna Fáil’s Éamon Ó Cuív, Galway Senator Pádraig Ó Céidigh and businessman Seán Gallagher.

In a statement, Ms O’Doherty said it was time for Irish people to come together to demand change and to put an end to what she described as “the corruption that has infested Irish public life and the disgraceful squandering of our taxes and resources”.

Woman who took High Court case released from hotel quarantine 11:07
Teenage girl (18) jailed for a year for her role in petrol bomb attack 11:05
Covid-19 vaccine registration system to open for 65-69 year olds tomorrow 10:32
Covid-19 Vaccine Tracker: What's available in the Republic of Ireland and what else is coming? 10:32
Mandatory vaccination of healthcare workers would be ‘most intrusive step’ - regulator 10:28