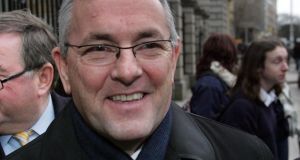 Public Accounts Committee chairman John McGuinness will temporarily step aside from the chair at its meeting tomorrow to make a statement on controversial comments he has made this week and on the judgement he exercised when he was a Minister of State.

Public Accounts Committee chairman John McGuinness will temporarily step aside from the chair at its meeting tomorrow to make a statement on controversial comments he has made this week and on the judgement he exercised when he was a minister of state.

Mr McGuinness, a Fianna Fáil TD from Kilkenny, has been under growing political pressure following a series of disclosures dating back to when he was a junior minister for trade in the Department of the Environment.

He confirmed that he will vacate his chair at the outset of tomorrow’s meeting for a special session. He will make a statement on remarks and positions he has adopted that have drawn criticism from colleagues. He will then answer any questions that are put to him by colleagues.

Members of Fine Gael and Labour have called on him this week to make such a full statement setting out his position and explaining why it does not run counter to his chairing of the committee.

The PAC is the Dáil’s most powerful and independent committee, which acts as the watchdog on wasteful State spending. As chair, Mr McGuinness clashed with senior figures in Government and in the civil administration over the past two years.

At issue is whether the stances adopted by Mr McGuinness when he was a minister of state are compatible with his current position as chair of the PAC.

Comments he made earlier this week that ministers’ spouses should be allowed in certain circumstance to travel abroad at the State’s expense drew criticism from colleagues on the PAC as well as from other TDs.

There have been a string of disclosures relating to Mr McGuinness in recent months, including high overtime payments claimed by his son, who was a member of his ministerial staff and the controversial refurbishment of hi s ministerial office which cost € 250,000.

However, in that case, the Office of Public Works has stated categorically that Mr McGuinness had no involvement or communication whatsoever in relation to the refitting of the office.

The vice chairman of the Committee, Kieran O’Donnell, said this morning an overall consensus was agreed by himself and his party colleagues on the PAC this week on its approach to the controversies.

“We agreed that John McGuinness, as chair of the committee, needs to make a comprehensive statement to the PAC on the matters raised. That will form the basis for questioning of members,” he said.

Robert Dowds of the Labour Party said the agreed position of his party was that it was up to Fianna Fáil leader Micháel Martin to deal with the issue at this stage and make a decision on whether it is appropriate or not for Mr McGuinness to continue as chairman. Mr Martin has strongly defended Mr McGuinness this week.

“It is good that he is doing that tomorrow. The difficult thing is from him to reconcile his comments [with his current role] given that he has been a strong advocate for no waste in spending of taxpayers’ money,” said Mr Dowds. He said at no stage had he suggested that Mr McGuinness should step down.

Several members of the committee, including Independent TD Shane Ross and Sinn Féin TD Pearse Doherty, have expressed concern that Mr McGuinness’s views, and the continuing controversies surrounding him, will impact on the committee and on its reputation as an independent and non-partisan committee.

Mr Martin, for his part, has accused Fine Gael this week of being involved in a dirty tricks campaign against Mr McGuinness in an attempt to force him out of office.