Joan Burton has resigned as leader of the Labour Party after less than two years in the role. 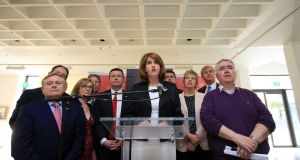 Joan Burton stamds with party colleagues as she announces her decision to stand down as Labour leader at a press conference in Dublin. Photograph: Nick Bradshaw.

Former tánaiste Joan Burton has announced she is stepping down as Labour Party leader, paving the way for a contest between Alan Kelly, Seán Sherlock and possibly Brendan Howlin to succeed her.

Ms Burton announced her decision at a Labour parliamentary party meeting in Dublin this afternoon.

She is to remain in the position, which she held for less than two years after replacing Eamon Gilmore, until a successor is chosen.

The issue of her successor was a matter of the party and she did not intend to be involved in the process, she added.

Ms Burton said February’s general election was very disappointing result for the party but she insisted Labour made the correct decision in 2011 when it entered coalition with Fine Gael.

“I entered government with both hope and fear in my heart - hope that with unyielding effort and sustained policy implementation we could turn things around; fear that the situation had already deteriorated to a point of no return,” she said.

Ms Burton said she would remain an active and committed Labour Party member.

The Dublin West TD said it was a difficult decision but one she has come to terms with over the past 10 weeks.

Ms Burton said she had devoted a lot of time to turning around the Department of Social Protection and hoped her successor Leo Varadkar would look after it.

Wexford TD Mr Howlin, the former minister for public expenditure, is the internal favourite to take the role. However, he has made it clear he is not keen to stand in a contest.

Mr Kelly, Labour’s deputy leader, is seeking support to run for the role and has improved his standing lately after a series of Dáil speeches supporting water charges and criticising the formation of the new Government.

Mr Sherlock, a former minister of state, had been eager for Mr Howlin to replace Ms Burton but is now willing to enter a leadership contest.

Under the Labour rules, a leadership election must take place in the aftermath of a general election if the party is not in government. Labour won 37 seats in the 2011 general election but returned with just seven in February.

The party requires each contender to be proposed and seconded by a member of the Dáil. Only seven TDs were returned including Ms Burton. Members of the Seanad are not entitled to propose a candidate, it is understood. If a contest does take place, each member of the party will have a vote.

In a statement, Taoiseach Enda Kenny said Ms Burton, his former tánaiste, and her Labour colleagues played “a major role in rescuing the Irish economy” after entering government in 2011.

“Many of the tough decisions that had to be taken to turn the country around were unpopular and politically difficult but Joan Burton and her colleagues were steadfast in doing what was right for the country,” he said.