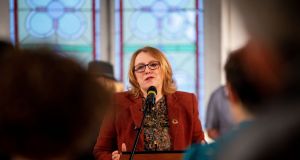 Just four people have been deported from the State since the coronavirus pandemic began but about 500 deportation orders have been issued, latest figures show.

The issuing of such orders stopped from April to July but recommenced in August.

Independent Senators Alice Mary Higgins and Lynn Ruane have introduced legislation for a moratorium on all deportations for the duration of the pandemic.

Ms Higgins said people received orders at the beginning of November for deportation this month and, while the State might say “we probably won’t” deport, “it is hugely distressing not just for the recipients but their wider community”.

The Department of Justice said in a statement at the weekend that it was “not possible to predict how many deportation orders might be made in any given year”.

It confirmed, however, that since St Patrick’s Day just four people were removed from the State, all to Brazil. Three of the deportations were ordered before March.

Minister for Justice Helen McEntee told Independent TD Catherine Connolly in a parliamentary reply two weeks ago that 469 deportation orders were issued since the outbreak of the virus in March up to the end of October.

Of the total, 200 deportation orders were issued in March, but none for the following four months from April to July. They recommenced in August, when 134 orders were issued, along with 35 in September and 100 in October, the last month for which figures are available.

Ms McEntee said her department and the Garda National Immigration Bureau, which has responsibility for deportations, “are taking a pragmatic approach” to enforcement during the pandemic. “This is evidenced by the low number of deportations actually carried out during this time.”

But Ms Higgins said that “rather than saying ambiguous things like ‘We’re pragmatic and it probably won’t happen’, they’d be better to give assurance that it won’t happen during this period of time”.

“As long as we are in a state of emergency, we shouldn’t be deporting people or issuing them with deportation notices.”

The legislation has a sunset clause, with the moratorium on deportations remaining in place for as long as the Government’s Covid emergency legislation remains in operation.

Ms Higgins also claimed that people had shown up for deportation and were then not removed but would receive another notice to show up three months later.

The department said that “persons who leave the State voluntarily preserve the right to enter the State at a later date, with a valid basis”.

But Ms Higgins said that “in some cases people have been presenting themselves for deportation for over a year or two years. It’s almost [like it’s] when the State decides it has flights.”

Taoiseach Micheál Martin said in the Dáil last month that he would not like to see anyone deported to countries badly affected by Covid-19 after the case of two Zimbabwean healthcare workers who faced deportation was raised.

But Ms Ruane said “lots of countries are struggling with Covid because of what a volatile situation it is, even in Europe, where Belgium changed within a matter of weeks” from coping well with the virus to being overwhelmed.

Since the start of the pandemic, the largest number of orders was issued to individuals from Pakistan (105), followed by Brazil (54), Albania (49) and Georgia (39).

It has also emerged that the department last June requested that a “dedicated testing pathway” for Covid-19 be established for people facing deportation.

The department had requested the “exceptional and temporary arrangement” via the Department of Health, which then contacted HSE chief executive Paul Reid.

In a letter sent to Mr Reid, Department of Health secretary general Jim Breslin said a number of countries required people entering to show proof they had tested negative for Covid-19.

“This is creating a barrier to entry for some, including voluntary deportees,” said Mr Breslin in the letter, seen by The Irish Times. “It would also pose a challenge should the State need to undertake an urgent deportation.”

A justice spokesman confirmed that “the need for testing asymptomatic individuals” facing deportation had been discussed with the HSE but, given the low number of deportations during the pandemic, “there was no need to progress discussions any further”.

The Department of Foreign Affairs also requested in June that the Department of Health put in place an arrangement for dedicated testing pathways for essential travel by its diplomatic staff travelling to embassies abroad.

The Department of Health requested the HSE to introduce arrangements for a test certificate to be issued to each person concerned. The HSE agreed and said this was appropriate.