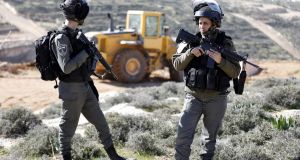 Irish ambassador to Israel Alison Kelly has been warned of “serious consequences” for Irish-Israel relations and Dublin’s standing in the region if the controversial Bill prohibiting importing goods from the occupied territories in Palestine becomes law.

The ministry said Ms Kelly was given an “angry rebuke” over the “scandalous” Bill. The severe diplomatic dressing down at the foreign ministry in Jerusalem on Friday morning followed Thursday’s passage of the first reading of the measure in the Dáil.

The Israeli government described the Bill, which covers goods produced on the Israeli-occupied West Bank, Golan Heights and in east Jerusalem, as “hypocritical and anti-Semitic.”

Israeli officials told the ambassador that Dublin should “concentrate on dark dictatorships and terrorist organisations instead of Israel, the only democracy in the Middle East.”

The ambassador was summoned to the foreign ministry following an unusually harsh statement from the office of prime minister Binyamin Netanyahu, who also serves as Israel’s foreign minister.

“Instead of condemning Syria for slaughtering hundreds of thousands of civilians, Turkey for the occupation of northern Cyprus, and terrorist organisations for murdering thousands of Israelis, Ireland attacks Israel, the only democracy in the Middle East. What a disgrace,” the statement read.

For her part, Ms Kelly reiterated comments made by Tánaiste and minister for foreign affairs and trade, Simon Coveney, during Thursday’s Dáil debate.

She stressed that the Government opposes the Bill as it would put Ireland in breach of EU law and expose Dublin to legal action by the European Commission.

And the Government is also concerned that it will have less influence in the region and lose its ability to help the Palestinians if the Bill becomes law.

Israel captured the West Bank from Jordan in the 1967 Six-Day War. The Palestinians claim it as part of a future state, a stance backed by Ireland along with the majority of the international community. Israel considers the area disputed rather than occupied territory.