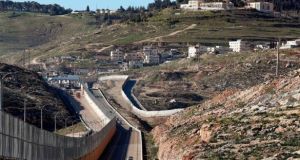 A wall separates Palestinians (right) and the side to be used exclusively by Israelis in a settlement near Jerusalem. Photograph: Getty Images

Israel has reacted angrily to a vote by TDs to ban the sale of imported Israeli goods from the occupied territories in Palestine, describing it as an example of “pure hostility”.

Three members of the Independent Alliance, Minister for Transport Shane Ross, Minsters of State Finian McGrath and John Halligan, abstained in the vote which passed second stage by 78 votes to 45.

Tánaiste Simon Coveney had asked them not to support the legislation, indicating that the vote could lead to Israel closing its embassy in Dublin and cause tensions in Irish-US relations.

The Government opposed it on the advice of the Attorney General, saying it would contravene European Union law and lead to substantial fines being levied on the State.

US companies in Ireland, and Irish companies in the US, could face impossible conflicts Mr Coveney warned, since senior US politicians favour forbidding US-based firms co-operating with Israeli trade bans.

However, Fianna Fáil foreign affairs spokesman Niall Collins who introduced the Bill in the Dáil, questioned the idea “that we are now being offensive to corporate America”.

Ireland values US firms’ jobs in Ireland, but that cannot give the US “a free pass on everything simply because it provides us with jobs”, he said, adding approvingly that Airbnb refuses to list rentals in the occupied territories.

“By trading in settlement goods we are helping to sustain this injustice. How can we condemn these settlements as illegal, as theft of land and resources, but happily trade in the proceeds of this crime?” she said.

Saying that Ireland could “set an example” for the EU, Trócaire chief executive Caoimhe de Barra described the Dáil vote as a “positive step” for justice, accountability and international law.

The international community “can no longer continue to condemn settlements as illegal while simultaneously economically supporting them”, she said, since they are one of the major barriers to peace.

However, the Israeli foreign ministry said it was “disturbing and disappointing”, accusing TDs of engaging “in a hypocritical attack on Israel instead of focusing on dictatorships that are slaughtering their own people”.

The controversial legislation is a “clear example of obsessive discrimination that should be condemned with disgust”, a spokesman for the ministry in Jerusalem said.

Earlier, Israel’s ambassador to Ireland Ophir Kariv had warned that it would make Ireland “the most extreme anti-Israel country in the western world and entrench it deeply on the wrong side of history”.

During the earlier stages of the Bill, Israeli officials argued that boycotts will primarily harm Palestinian labourers employed in Israeli factories in West Bank industrial zones.

The head of the right-wing Yisrael Beiteinu party, Avigdor Lieberman, when he served as defence minister last year, urged that Israel should shut down its embassy in Dublin.

“There is no point in summoning the Irish ambassador to Israel for a reprimand,” he said. “We will not engage with Israel’s oppressors. We won’t turn the other cheek to a country which boycotts us.”

Describing the vote as “historic”, however, Palestinian chief negotiator Saeb Erekat said it was “a courageous step” that builds on old ties between Ireland and Palestine and “showed the way” to the rest of the EU.

Dublin council promised to drop claims for €12m ‘in return’ for white-water rafting grant 02:39
Election 2020: Parties warned of ‘insane’ election promises as Varadkar offers Martin coalition 02:37
New coronavirus is increasingly likely to spread to EU, health bodies warn 02:21
Election 2020: Record share of women running for Dáil seats 02:20
‘I don’t know if he died . . . but I don’t want him in the Tuam tanks’ 01:49
SUBSCRIBER ONLY