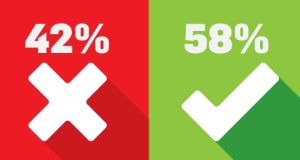 The latest ‘Irish Times’/Ipsos MRBI poll finds once the undecideds and those who will not vote are excluded, the Yes side leads by 58 per cent to 42 per cent

The Yes side retains a clear advantage in the abortion referendum campaign, but its lead has reduced sharply in the last month, the latest Irish Times/Ipsos MRBI opinion poll has found.

The No vote is at 32 per cent, an increase of four points, while 17 per cent are undecided (a decline of three points). Seven per cent said they will not vote or refused to say.

Once the undecideds and those who will not vote are excluded, the Yes side leads by 58 per cent to 42 per cent, with just over a week to go before polling day.

While this shows a decline of 10 points in the Yes lead since late April, those in favour of repeal still command a 16-point lead as the campaign enters its final, decisive stage.

A tightening of the race was expected by all sides as polling day approaches, and pollsters say that process is likely to continue in the days ahead. But while the Yes side lead has been cut, the No side requires a dramatic acceleration of that process if it is to secure a majority on May 25th.

Dublin remains the most pro-repeal part of the country, with the Yes side leading in the capital by 68 per cent to 32 per cent, once undecideds and unlikely voters are excluded.

The Yes lead is smaller but clear in the rest of Leinster and Munster, while the two sides are almost tied in Connacht-Ulster, with 51 per cent of declared likely voters saying they will vote Yes and 49 per cent backing the No side.

Younger voters are much more likely to support the Yes side, though the youngest cohort of voters (18-24 year-olds) shows a sharp drop in Yes supports in the last month. Voters aged over 50 are in favour of retaining the Eighth Amendment.

Women, urban voters, and those from wealthier backgrounds are more in favour of repeal, while farmers and those from the poorest households have small No majorities.

The poll shows that a significant minority of declared Yes voters believe that the Government’s proposal for legalising abortion “goes too far”, while 47 per cent of all voters say the law needs to be changed, but 12 weeks is too far.

However, many of those voters still intend to vote in favour of the referendum proposal. Over half of all voters (54 per cent) say that while they have reservations about the 12-weeks proposal, they believe it is a “reasonable compromise”. Just over a third of voters (35 per cent) disagree.

Among those who have yet to decide, more undecided voters are leaning towards Yes (31 per cent) than No (24 per cent), though most say they are not leaning in either direction.

The poll was conducted on Monday and Tuesday of this week in face-to-face interviews among a nationally representative sample of 1,200 eligible voters. Interviewing took place at 120 sampling points across all constituencies. The accuracy level is estimated to be about plus or minus 2.8 per cent.