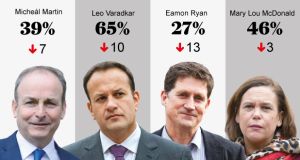 Approval ratings for the Government and all the main party leaders have fallen, the latest Irish Times/Ipsos MRBI opinion poll has found, as the pandemic takes its toll on the public mood.

The Green Party has also seen its support decimated since entering government, falling by eight points to just four per cent since the last poll, conducted in June before the party formed the coalition with Fine Gael and Fianna Fáil.

The satisfaction rating for Green Party leader Eamon Ryan slumps by 13 points from 40 per cent to 27 per cent.

However, support for the other two coalition parties is holding up, with Fianna Fáil gaining by three points to 17 per cent and Fine Gael slipping marginally by two points to 35 per cent.

There is better news for Sinn Féin, which sees its support rise by four points to 29 per cent, continuing the rise in support that brought its outstanding result in the general election in February.

The comparisons are with the last Irish Times/Ipsos MRBI poll taken in June of this year, just before the change of government.

Government satisfaction has tumbled from the 72 per cent enjoyed by the outgoing Fine Gael-led minority administration in June to 48 per cent today, still a high level judged by the trends previously evident in this series.

The Labour Party’s rating has doubled from 2 per cent in June to 4 per cent, returning to the level of the February general election.

Undecided voters are at 18 per cent, up two per cent since June.

But while Government satisfaction has slumped since June, there is some encouragement for the coalition.

Forty per cent of voters agree that the Government has made some progress and “deserves to be allowed to get on with the job”.

Less than a third (31 per cent) agree that it is “not making enough progress and it is time for a change”, while 23 per cent say it is time for “a radical change of direction”.

This represents a reduction of 21 per cent in voters who want a change since the question was last asked by this series of polls before the general election in January. The poll was taken between Saturday, October 3rd and Tuesday, October 6th, through in-home interviewing of 1,200 adults at 120 locations in every constituency.

The accuracy level is estimated at plus or minus 2.8 per cent. The latest poll saw a return to the usual face-to-face methodology, after June’s poll was conducted via telephone interviews due to the pandemic.