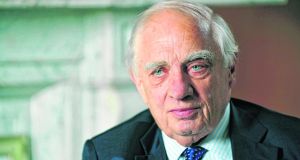 Peter Sutherland, former EU Commissioner: ‘Other neutral states within the Union . . . have made domestic declarations of solidarity to other member states in clear and unambiguous terms. They were not bound to do so but they have seen it as their duty.’ Photograph: Aidan Crawley

He said the Irish position contrasted with that of other EU neutral states such as Sweden and Finland who had acknowledged their obligation to aid partners who are invaded.

Delivering the inaugural Barrett Family lecture at the Nanovic Institute for European Studies in Dublin on Monday, Mr Sutherland said it was time for a full debate on the meaning of Irish neutrality.

“It seems that ‘neutrality’ (even without a full understanding of what we mean by it) has become holy writ in Ireland. This may have inhibited real debate here on the responses to current perceived external threats to member states.

“It is hard to see this situation changing here because there is little evidence that anyone wishes to discuss it politically. Our situation on this subject stands as something of a contradiction [to] our ostensible belief in an integrated European Union,” said Mr Sutherland.

He said our diplomatic position, since we joined the EEC, had been to avoid any overt implication that a defence commitment formed part of our engagement but it was not right to avoid the issue in this way.

“Ireland, which has made a disproportionately significant contribution to UN peacekeeping operations, has demonstrated a capacity that will enable it to play an openly active role in developing the European defence policy and should not be afraid to be seen to do so.”

He recalled that a quite a different message was given at the time of accession to the EEC about potential commitment to European defence.

“Then, our ministers and taoisigh made it clear that Irish neutrality would not inhibit us, in due course, in participating from the development of European defence policy when the time came.”

Mr Sutherland said the issue of defence solidarity was now clearly on the table and EU Commission President Jean-Claude Juncker made this clear, eight days ago, in a reference to a “European Army” even if that was a long way off.

“But he was correct to point to the necessity for Europe to ‘seize its responsibility to the world’ in this and also in the area of foreign policy more generally. One important aspect of this should be much more active military cooperation by the member states.”

Mr Sutherland said that Article 42.7 of the Treaty of Lisbon provided that “if a member state is the victim of armed aggression on its territory, the other member states shall have towards it an obligation of aid and assistance within Article 51 of the United Nations Charter. This shall not prejudice the specific character of the security and defence policy of certain states.”

He said the last sentence was no doubt significantly influenced by Ireland’s advocacy but he asked if this country had obligations to EU partners notwithstanding this caveat in the Lisbon Treaty.

“Other neutral states within the Union have not been slow to consider their positions following this treaty. They have made domestic declarations of solidarity to other member states in clear and unambiguous terms. They were not bound to do so but they have seen it as their duty to express their responsibilities to other member states as they see them.”

He said in March 2009 the Swedish Government accepted its obligation for solidarity stating: “Sweden will not remain passive if another member state or Nordic country suffers an attack. Sweden should have the ability to give and receive military support.”

He said that Finland too had made its own declaration of solidarity stating its readiness to defend other member states with all means available.

“Do we disagree with these declarations? Personally I hope that we might in fact agree with them and express these in some way or another,” said Mr Sutherland.