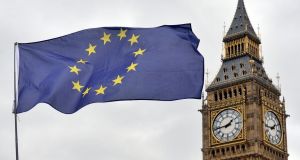 Brexit ‘represents a serious disturbance to the Irish economy’, according to a new Government report. Photograph: Victoria Jones/PA Wire

The Government has warned the European Union that Ireland faces uniquely significant and unprecedented challenges to peace and prosperity from the United Kingdom’s decision to leave the EU.

In a report to the EU, the Department of the Taoiseach said the handling of those challenges “in the months and years ahead will define the future of our island for decades to come”.

Some sections of the Irish economy were already feeling the impact of Brexit, it said, adding that the continuing uncertainty surrounding the UK’s future relationship with the EU and currency swings posed difficulties.

The UK’s decision “presents uniquely significant and unprecedented political, economic and diplomatic challenges for Ireland, given the extent of the inter-connectedness of our people and economies”, it said.

The Government said it believed the best possible outcome from the forthcoming negotiations was to secure close economic and trading relationships between the EU and the UK, after it has left.

Raising the prospect that Ireland will seek targeted EU aid to cope with the Brexit fallout, it said “a strong case” would be made where Brexit “represents a serious disturbance to the Irish economy”.

Emphasising Ireland’s continued place as an EU member, the report approved by the Cabinet last week stresses that Ireland is open for business, trade and investment.

Meanwhile, Minister for Foreign Affairs Charlie Flanagan has criticised the lack of engagement by the British Government in the ongoing political deadlock in Northern Ireland.

Speaking to The Irish Times, Mr Flanagan said, equally, there was an obligation on both the Democratic Unionist Party and Sinn Féin to form an executive to counter the threat of Brexit.

The lack of an executive leaves Northern Ireland unprepared for the risks ahead: “The next 10 days are absolutely crucial. I understand there are still deep divisions between both sides.

“Without a functioning executive it is difficult to have a common position on specific Irish concerns, such as the Border and the Common Travel Area,” Mr Flanagan said.

The negotiations, involving Northern Ireland’s main political parties, were adjourned last Wednesday and will resume after Easter with the aim of forming a new executive by early May, after earlier deadlines were missed.

Secretary of State James Brokenshire has warned that either direct rule will be imposed by London, or another election will be called if the parties fail to reach a deal.

Mr Flanagan praised the efforts of the Secretary of State but added there had not been “sufficient engagement” from the British Government to the ongoing stalemate in the North.