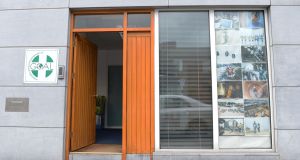 A report by USAid, confirms that it has decided not to suspend or disbar Goal from American funding. Photograph: Cyril Byrne

A US government investigation into alleged fraud at the aid agency Goal included an examination of claims involving members of its senior management team and field offices, an official report has stated.

However, the report by USAid, the US government’s overseas aid arm, confirms that it has decided not to suspend or disbar Goal from American funding. Instead, having received assurances from Goal about changes to its corporate governance and internal controls, USAid will continue to fund the agency as long as it adheres to a strict set of conditions.

That decision is a major boost for Goal. The charity was thrown into crisis in April 2016 when it was drawn into an investigation by the US Office of the Inspector General (OIG) into alleged collusion and bid-rigging in southern Turkey, from which Goal and other aid agencies ran their Syria operations. At the time, USAid ordered Goal to halt procurement in Syria using certain US money and the Department of Foreign Affairs withheld millions of euro in pledged funding.

Under the terms of an administrative agreement between Goal and USAid, published on Wednesday, the Dún Laoghaire-based outfit accepts responsibility for “procurement system weaknesses, mishandling of conflicts of interest, and an inadequate investigation function that compromised the integrity of its USAid-funded awards.”

Outlining the claims at the centre of the case, the agreement states that the OIG investigated “alleged corrupt activities of certain Goal employees and various related failures of the organisation’s internal controls and procurement systems”. It added: “Actors alleged to be directly engaged in corruption and conflicts of interest included both field office staff and members of Goal’s senior management team.”

In the agreement, USAid says it has “ongoing concerns with Goal’s present responsibility” centred on three areas: procurement system weaknesses, mishandling of conflicts of interest and inadequate investigation function.

However, USAid acknowledges that Goal “responded proactively” from the time the allegations of fraud were brought to the attention of its board in April 2016. The agreement states that Goal undertook “immediate protective and remedial measures”.

It states that key individuals had left the senior management team, the management structure had been overhauled and Goal was undertaking “systemic reforms” in specific areas where vulnerabilities were identified. The agency cooperated fully with USAid and OIG, it adds.

While USAid could have opted to ban Goal from receiving any future US funding, instead the US government has decided that Goal’s actions over the past year “provide adequate reassurance that Goal’s future dealings with the government will be conducted responsibly, and that suspension or disbarment is not necessary at this time”.

The agreement points out that USAid could exclude Goal from future funding on the basis of its outstanding concerns. “USAid has determined, however, that based upon the information currently known to USAid, Goal’s corrective actions, remedial actions, and further undertakings made by Goal with this agreement, provide adequate assurance that Goal’s future dealings with the government will be conducted responsibly, and that suspension or disbarment is not necessary at this time.”

Under the terms of the new deal, which will remain in place for two years, Goal will submit to close supervision by USAid as it implements a rigorous system of internal checks and controls.

The charity has agreed to voluntarily abstain for 12 months from bidding for new contracts in countries in which is has not worked in the past year. That means Goal will be able to bid for contracts in about 18 countries.

It must also appoint an independent consultant, at its own expense, to review and report on its implementation of the USAid deal.

Goal has also agreed to pay restitution to USAid for any losses of US money as a result of misconduct. A figure has not yet been finalised, according to the document.

Under the deal, Goal has pledged to take a number of specific steps, including the establishment of a business ethics and compliance programme. It must inform USAid of any changes in its senior management team and maintain the position of head of compliance and ethics for the duration of the agreement.

Other clauses commit Goal to producing an updated code of conduct and organising staff training, including in US laws covering corruption, fraud and conflicts of interest.

Goal is in talks with Oxfam Ireland about a potential merger that would create a new entity called Oxfam Goal. The USAid deal stipulates that if Goal merges with another entity during the terms of the agreement, it will remain in force exclusively with respect to Goal’s transferred assets and programmes within the new organisation.