If talks fail Stormont could be down for a decade – Robinson 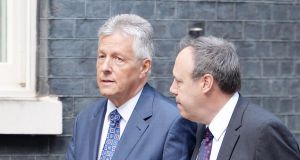 A fresh attempt to provide political stability at Stormont began on Tuesday evening with the Ulster Unionists insisting they would only partially engage in the new talks and Sinn Féin president Gerry Adams sharply criticising the Northern Secretary Theresa Villiers for suggesting the Northern Executive and Assembly could be suspended.

Minister for Foreign Affairs Charlie Flanagan as he arrived at Stormont also expressed disappointment at what he described as the British government’s “unilateral action” in threatening to take over responsibility for welfare if Northern politicians did not accept British welfare reform.

These Stormont talks are focussing on two key issues: the fallout from the killing of Belfast republican Kevin McGuigan and the police assessment that some IRA members were involved although without the sanction of an IRA leadership; and the deadlock over welfare reform which was part of the stalled Stormont House Agreement of last Christmas. Regardless of the IRA controversy the budgetary implications of the welfare impasse could make Stormont financially unsustainable by sometime this autumn, Ms Villiers has warned.

UUP leader Mike Nesbitt, who has withdrawn his Minister from the Northern Executive, said his party would not take part in negotiations on welfare reform and implementing the Stormont House Agreement unless and until the issue of the status of the IRA was resolved. He would first only talk about the IRA, he said.

“I objected to the agenda being front-loaded with sessions about the Stormont House Agreement, as if Kevin McGuigan had not been murdered, and the PSNI had not identified IRA involvement,” he said.

“We took a principled stand to withdraw from the Northern Ireland Executive on the issue of Sinn Féin’s lack of credibility. On that basis, we will remain consistent, and not participate in political talks unless and until this matter is resolved,” he said.

Notwithstanding what has been depicted as some grandstanding DUP leader Peter Robinson said the talks were extremely important. “If the Assembly and Executive falls we are probably talking about the best part of a decade before it would ever be revived,” he said.

Mr Robinson said he has asked the British government to invite the PSNI chief constable George Hamilton to address the talks on his assessment that the IRA still exists and some of its members were implicated in Mr McGuigan’s murder.

Earlier on Tuesday in the House of Commons Ms Villiers told MPs she did not think the time was right to suspend Stormont. She indicated, however, that it could happen.

“If the circumstances were to change in the future, we would of course need to look at all our options,” she said.

This prompted severe rebukes both from Mr Adams and the Sinn Féin Deputy First Minister Martin McGuinness as they entered the talks at Stormont House. “I think that decision would be above her pay scale,” said the Sinn Féin president.

He indicated that the Belfast Agreement and the St Andrew’s Agreement meant that legislatively the British government could not unilaterally suspend the powersharing institutions. “This is an international agreement. It was voted on by people on both parts of this island,” he said.

Talks are continuing on Wednesday and Thursday and are due to resume again next week.