General election drums beating ever louder as votegate rumbles on 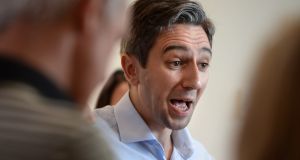 Minister for Health Simon Harris has been seeking to turn up the heat on Fianna Fáil since the voting issue emerged . File photograph: Dara Mac Donaill/The Irish Times.

The “vote-gate” controversy has led to a deterioration in already frosty relations between Fine Gael and Fianna Fáil and heightened the likelihood of a general election taking place soon.

The desire for an election, once equally shared between the two parties, has in recent times become asymmetric: an election is desired more by Fine Gael now than it is by Fianna Fáil.

The Government party is buoyed by Brexit breakthroughs and a few encouraging polls, and believes that some sort of a resolution in the UK would open the door for a November election here. As such, for a party on an election footing, a self-inflicted wound by its opponents is a gift it is determined to exploit to the full.

But there is not agreement among senior Fine Gaelers about what constitutes an opening for an election. For some, a British general election, even in the absence of ratifying the Withdrawal Agreement, would be sufficient; for others in the more cautious camp, ratification of the treaty – and therefore the commencement of the standstill transition period – would be needed.

Regardless, all agree that they should flog the Dáil voting controversy for everything its worth. It is clear from the way that Fine Gael Ministers have sought to dial up tensions on the issue.

On Wednesday in the Dáil, Minister for Health Simon Harris – widely perceived to be among the leaders of the election lobby in Fine Gael – goaded Fianna Fáil’s Willie O’Dea, reminding him of a famously unwise photo he posed for pointing a gun at the camera when he was minister for defence.

Harris had earlier tried to raise the heat on Fianna Fáil by telling RTÉ’s Morning Ireland that Timmy Dooley, the TD who the voting issue originated around, had been “heading down the M8 home to Clare while someone else stays in the Dáil and votes six times”.

The sheer bad temper of many of the exchanges between the two parties is unmistakable. One Fianna Fáiler called it a “poisoning of relations”.

It is not the deterioration of relations that makes an election more likely; the parties do business with each other because they have to and think it is in their interests, rather than because of any mutual affection.

But the acrimony reinforces the view of many Fianna Fáil TDs that they get nothing out of the confidence and supply arrangement.

“They depend on our support for four Budgets and Brexit,” complains one senior Fianna Fáiler.

The unspoken question and answer: What do we get? Sod-all.

For Fine Gael, the damage it believes Fianna Fáil has suffered this week strengthens the case of those arguing for a November election.

A decision on an election will necessarily weigh up a number of factors. But one of them will be the perception in Fine Gael that Fianna Fáil is vulnerable right now. And as one Fine Gael source points out, if Fianna Fáil doesn’t want something, we should want it. Electoral politics is largely a confrontational, adversarial pursuit.

The episode has dominated the week at Leinster House, demonstrating how politics can be suddenly upended with unpredictable consequences. It has exposed huge flaws in how the Dáil works, but it is debatable whether the controversy has any long-term political significance.

It seems unlikely that it will be uppermost in voters’ minds into the medium future. But it is certainly on the minds of decision-makers in the Dáil and Government Buildings now. As a result, the election drums are beating ever louder.