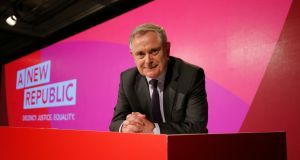 Labour leader Brendan Howlin expects there will be a general election in the first half of next year and said he would not be entering into any pre-election pacts with other parties.

“We obviously are facing a general election sometime in the coming months, my own judgment on it is that it will be sooner than the European or local elections, which we know are scheduled for May of next year,” he told reporters ahead of the start of the party’s annual conference in Dublin on Friday.

Mr Howlin said his party would be campaigning “on a very clear Labour party policy platform” and that representatives would be setting out the party’s “red-line issues” during the weekend conference.

Mr Howlin said the party was preparing 23 candidates selected to challenge for Dáil seats as well as 43 others seeking election to local authorities. He said there were other areas throughout the country where candidates were yet to be selected.

“The bottom line is we want to ensure we maximise our vote. We also want to make sure as many people as possible are given the opportunity to vote for a Labour candidate,” he said.

Mr Howlin said Labour “of course” had an expectation of how many Dáil seat it could win and that he believed “we will be in double digits after the next election and I think that’s absolutely achievable and will be achieved”.

About 1,000 party members and supporters are set to attend the party’s 70th annual conference.

In his opening remarks to delegates, Mr Howlin asked members “who would have any confidence in this Government” given “what have they delivered”.

He said the minority Fine Gael administration had inherited an economy “that was well on its way to recovery” but seemed not to know “how to use the opportunity they have been given to make the necessary changes to improve people’s lives”.

“They are conservative in every sense of the word,” he added.

Mr Howlin said “it’s all the more difficult to travel across Ireland” with Mr Ross as Minister for Transport and that his claim he had nothing to do with the proposed BusConnects plan for Dublin was “just one example of how the current Government is a shambles”.

Meanwhile, he said Mr Higgins ran a campaign in contrast to Mr Casey’s “Trump tactics”. He said the business man had been “grabbing headlines by picking what vulnerable group to bully next”.