Head of British Academy speaks of concerns for humanities, social sciences and movement of researchers 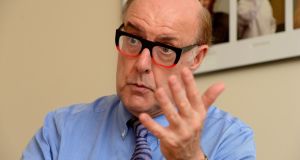 Sir David Cannadine told an event at NovaUCD, that it was not clear what the future position for Britain regarding the significant funding its academics currently obtain from the European Research Council.Photograph: Cyril Byrne

Historian Prof Sir David Cannadine, president of the British Academy, was speaking at an event at NovaUCD, the centre for new ventures and entrepreneurs, in Dublin on Friday. It was organised by the UCD School of History.

The British Academy, a fellowship of over 1,000 distinguished academics, is the UK’s national body for the humanities and social sciences.

In a broad discussion on the future of research, humanities, arts and social sciences in Britain following Brexit, Prof Cannadine said it was impossible to understand the current context – particularly in relation to the Border – without understanding the history of the UK’s relationship with Ireland and its handling of “the Irish issue”.

“Ireland became, in a sense, to British politics in the 19th century what Europe has become in the later part of the 20th and 21st century, an issue that would never go away, that nobody seemed able to sort, and where opinions on it did not map directly onto British party political loyalties,” he said.

The history of the “inadequacies and imperfections of the 19th century Anglo-Irish union” were now, he suggested, “mapping onto and being an essential part of the history of the no less unhappy union between the United Kingdom and the EU”.

All of this was now “tied together in a very complicated and intractable way”.

Prof Cannadine said part of the British Academy’s role was to persuade government to take a broad view of “critical matters of our age”, and to make the case that the expertise of those in the humanities and the social science was essential to solving those issues.

Such issues included productivity, ageing, climate change and artificial intelligence, which were “increasingly being framed as puzzles that only the natural sciences can solve”, Prof Cannadine added.

“That being so, we also need the humanities to understand those changes and to put them in a long term, historic context, and social sciences to help us come to terms with managing and analysing the consequences of those changes,” he added.

Prof Cannadine said analyses of “how we got into this mess in Britain” in relation to Brexit frequently fell into the category of argument involving “utter distrust of experts”.

He said if the last two years had taught Britain anything new it was that more experts were needed, not fewer.

The academy president said more than ever it seemed to him we needed to “proclaim and re-state the value of tolerance, humane learning, evidence-based research and free trade in ideas”.

It was not just science and technology that drove change, but ideas generated in the humanities and social sciences often also drove change. Among such ideas that had fundamentally changed the world in the past 50 years were human rights, feminism and equal pay.

Prof Cannadine noted the links between the British Academy and the Royal Irish Academy had been “exceptionally strong” and long-lasting and the bodies had produced joint research that had been sent to the appropriate Brexit negotiators in Brussels and London.

The papers, which include one on the historical context of the Border and another on the Belfast Agreement, “have indeed had some impact on the conversations”, but not as much as he would like.

On the future of research, Prof Cannadine said there was concern about future mobility of researchers and collaborations betwen Britain and the EU, as well as with the rest of the world, after Brexit.

It was also not clear what the future position for Britain would be with regard to the significant funding its academics currently obtain from the European Research Council.