Fine Gael TD Kate O’Connell has said the conditions in a hospital emergency department she attended with her child in recent days were “shocking”. Video: Oireachtas TV 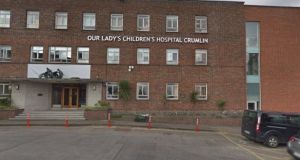 Fine Gael TD Kate O’Connell has said the conditions in a hospital emergency department she attended with her child in recent days were “shocking”.

Ms O’Connell, a prominent Fine Gael backbench TD, said she had attended Our Lady’s Children’s Hospital Crumlin over the weekend with a child.

The Dublin Bay South TD was speaking at an Oireachtas committee on health on Wednesday, which was hearing from officials on the progress of the new national children’s hospital.

“I happen to have paid a visit to Crumlin A&E myself on Sunday evening with a child,” she said.

The Fine Gael TD was critical of the conditions in the emergency department. “It’s wholly unacceptable to my mind that a waiting room would have vomiting babies, breastfeeding mothers, head injury children, broken arm children, all in the one mix,” she said.

The delivery of the new children’s hospital, which has been engulfed in controversy after major cost increases, could not come quick enough, said Ms O’Connell.

Ms O’Connell also raised the hospital visit during a private meeting of Fine Gael’s parliamentary party, where she compared the emergency department conditions to a “South American” facility, according to a report in the Irish Examiner.

Ms O’Connell told her colleagues she had waited for her child to be seen for several hours before leaving, describing staff as “very stressed”. She said she was afraid she would be recognised and “lynched” by other parents there with children.

Tánaiste Simon Coveney supported her comments in the Dáil on Thursday. He said Ms O’Connell was expressing her understandable frustration as a parent and a TD at her experience of unacceptable delays.

During leaders’ questions Fianna Fáil deputy leader Dara Calleary claimed the Government did not understand the extent of the health service crisis.

Mr Calleary said “that was confirmed to me” when a Government TD expressed shock at conditions in Crumlin childrens hospital. The Government was only admitting the reality “when one of your own colleagues wakes you up to it”.

The Mayo TD said many parents expressed the same frustration and annoyance as Ms O’Connell as they wait and he said the main problem was the lack of funding to recruit staff to provide adequate care.

In Temple Street 12 of the 13 A & E beds had children who were being admitted but could not move to hospital wards because of a lack of available beds, he said, before he highlighted the safety inspection by a fire officer at Limerick University Hospital which resulted in a number of trolleys being moved because of overcrowding.

Mr Coveney said the delay his colleague experienced was unacceptable but demonstrated the urgent need for the new national children’s hospital which was being built.

But he in turn hit out at Fianna Fáil and told Mr Calleary “your fake outrage is a bit much”. He added that “the idea that you are somehow trying to spin this message that the Government doesn’t care or know what is going on is nonsense”.

Many good things were happening in the health system although there were pressure points such as emergency departments, which increased during winter with flu outbreaks, vomiting bugs and viral infections.

A number of elective procedures had to be deferred because of pressures on the system and the HSE had apologised to parents for this but every effort is being made to improve the situation, he said.