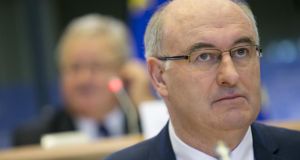 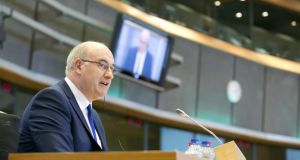 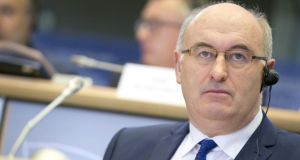 Ireland’s European Commissioner-designate Phil Hogan confirmed this morning he had made representations on behalf of his constituents for jobs at Irish Water at the European Parliament committee hearing into his nomination this morning in Brussels.

“None of them got a job, so I must be losing my influence,” he joked. Responding to a question from Luke “Ming” Flanagan MEP, Mr Hogan said that, as a public representative, “you do try and actually help people to get employment”.

Mr Flanagan asked Mr Hogan would he continue to support a Common Agriculture Policy (CAP) for “the ranchers and the millionaires”, noting that the richest 20 per cent get 80 per cent of the payments under the CAP policy.

Mr Hogan had earlier criticised Sinn Féin for its anti-European stance while noting he has the full support of Sinn Féin’s Northern Irish Minister for Agriculture as EU agriculture Commissioner when responding to the first question on his recent political controversies in this morning’s parliamentary hearing.

Sinn Féin’s Matt Carthy asked Mr Hogan to clarify how many legal letters he had sent to politicians and journalists over his alleged involvement in a dispute over Traveller accommodation, asking whether Mr Hogan would have “the time and concentration” to focus on his job as Commissioner.

“I know you are a new member of politics, but I have been a member for 27 years,” Mr Hogan replied, adding: “I know what parliamentary privilege is, and I know what it isn’t.”

Noting that Mr Carthy was “against Europe” and against his own nomination, Mr Hogan proceeded to read a letter from Northern Ireland’s Minister for Agrilcuture Michelle O’Neill, in which she outlines her support for Mr Hogan’s nomination.

“There seems to have been a breakdown in discipline in Sinn Féin, and I hope you don’t get into trouble over it,” Mr Hogan said to laughter and applause.

Earlier, Mr Hogan, who did not refer to any of the recent domestic political controversies in his opening statement, pledged to simplify the CAP and the system of direct payment for farmers as he began his three-hour hearing before the Parliament’s agriculture committee.

In his opening 15-minute presentation to MEPs, a relaxed Mr Hogan said he himself had been raised on a farm, and wanted agriculture to pay a key role in promoting jobs and growth.

He said he would monitor the situation regarding the abolition of milk quotas next year, and would simplify the administration around the CAP for farmers, and in particular the system of direct farm payments.

At various points Mr Hogan stressed his commitment to Europe, noting he had campaigned for a Yes vote in the various treaties voted on by the Irish people. “Those treaties have brought greater democratic legitimacy to European politics by heightening the role of the European Parliament,” Mr Hogan said.

“I have long believed in Europe and I have long served the interest of rural and farming communities,” he added.

Responding to the first question from Mairead Mc Guinness MEP, who raised concerns about the status of producers in the food-supply chain, Mr Hogan said he was willing to consider introducing a legal measure to combat unfair business practices, noting that the current voluntary system lacked an effective enforcement mechanism.

“No doubt the rapid concentration of retailers and processing industries has resulted in an uneven bargaining power for farmers,” Mr Hogan said.

While Mr Hogan said he welcomed the proposed mid-term review of CAP, he said it was important that the new CAP policy agreed last year was first allowed time to bed down.

Asked about the abolition of milk quotas next year, Mr Hogan said he was not prepared to provide “additional soft landing support”, as it would be unfair to change milk quotas at this stage, noting that a number of countries had not reached their quotas this year.

Asked about the environmental impact of the Nitrates directive, Mr Hogan said it was important that a balance was struck between “good water sources and quality” and the targets that have been set for member states.

Asked by British Ukip MEP Stewart Agnew if he would visit his farm in England, Mr Hogan replied: “Don’t expect me to farm your land itself,” a response that elicited laughs and applause from the room, before adding that he would intend to visit all member states as Commissioner.

Mr Hogan is later expected to face tough questioning from Independent Luke “Ming” Flanagan during his appearance before the agriculture committee.

Mr Carthy had earlier said he intended to focus his questioning on Mr Hogan’s past record rather than his future plans as Commissioner. Revelations last week that Mr Hogan sent legal correspondence to Independent MEP Nessa Childers received a cool response from MEPs across the political spectrum, with a number questioning the Commissioner-designate’s political judgment.

Mr Hogan’s appearance comes as Britain’s nominated commissioner Jonathan Hill was informed last night that he may be called back for a second hearing before MEPs, following his three-hour hearing yesterday afternoon.

It is understood that MEPs were unhappy with the level of detail provided by the former speaker of the House of Lords, who has been nominated as financial services commissioner at his hearing yesterday. British prime minister David Cameron’s nominee will face his second hearing next Monday or Tuesday.

EU sources last night suggested Mr Hogan would pass today’s hearing, though a number of MEPs who spoke to The Irish Times last night said the way in which Mr Hogan responds to questions about his political past will be key to his performance.

All 45 full-time members and 45 substitute members of the European Parliament’s agriculture committee are entitled to attend the hearing. However, the fact that Mr Hogan’s hearing clashes with that of French commissioner-designate Pierre Moscovici means that a number of MEPs are likely to miss the hearing.

According to the European Parliament, time has been allocated for 45 questions, with the European People’s Party (EPP) assigned 11 questions, and the second-largest group, the Socialists and Democrats (S&D) assigned 10 questions. The other political groups are then assigned a number of questions in relation to their size.

Following the hearing, the co-ordinators of the main political groups will meet to review Mr Hogan’s performance this afternoon. Should a consensus view not be reached by the group co-ordinators, the committee could be recalled and a vote taken, though this is unlikely to take place before Monday.

Under the EU treaties, all nominated EU commissioners must be approved by the European Parliament, a separate arm of the European Union. In 2004 the Parliament rejected the Italian nominee for commissioner, while in 2009 Bulgaria’s commissioner-designate was rejected, forcing both countries to re-nominate a commissioner.

However, Parliament sources have suggested that the Parliament may assent to all 27 nominated commissioners, mainly due to the fact that the two main political groups in the Parliament, the EPP and S&D have formed an informal coalition since May’s European elections.

Yesterday, Britain’s Jonathan Hill was questioned by the economics committee about his suitability for the role of Financial Services commissioner.

Sinn Féin’s Matt Carthy asked Lord Hill if he supported Ireland’s request for retroactive direct bank recapitalisation for its banks through the ESM fund. Lord Hill said that, while legally it is possible, any decision had to be handled on a case-by-case basis and would have to secure the unanimous agreement of all euro zone member states.

Responding to a question from Fine Gael’s Brian Hayes, Lord Hill confirmed he would prioritise a capital markets union during his tenure. The government is understood to be supportive of the British commissioner’s appointment, which is expected to be positive for the IFSC.

Spain’s Miguel Arias Canete, who has been lambasted by NGOs for his links with business, as well as sexist comments he made in a recent TV debate in Spain, was being questioned by the Energy committee yesterday evening.

The Parliamentary committee hearings began last Monday and will continue until next Wednesday. The European Parliament will then vote on the appointment of the entire Commission on October 22nd in Strasbourg, with Commissioners taking up their posts on November 1st. Commissioners are elected for a five-year term, and command a basic salary before tax of €250,000 plus allowances.