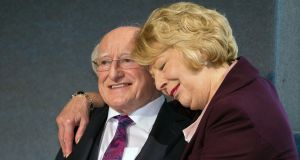 President Michael D Higgins says he will bring fresh ideas to his second term to help the country face challenges such as Brexit and climate change.

The President secured the highest personal vote in the history of the State. Mr Higgins won 56 per cent of the vote, granting him a first-count win, while his nearest rival, Peter Casey, finished on 23 per cent.

Speaking at Áras an Uachtaráin on Sundayy evening, Mr Higgins put a particular emphasis on sustainability: “During the next seven years of the presidency I hope we will be able to engage on the basis of fresh ideas, with challenges that are both local and global.

“I look forward to being part of a transformation that values ideas, and privileges commitment to deliver sustainability at home and abroad,” he said.

Sources said they expected the Áras to release some details of presidential expenditure – raised by his opponents during the campaign.

In his acceptance speech on Saturday night at Dublin Castle, Mr Higgins outlined the themes of his second term.

He cited the coming commemorations of the events of 1919-1923, describing them as “challenging, often difficult, periods of our history”.

He pledged to represent Ireland’s voice abroad “as we face challenges that are global – responding to climate change and sustainability, the challenge of global hunger in a way that is sustainable, Brexit, trade and a fragile multilateralism”.

Though acknowledging “the offer of public service” of the other five candidates, Mr Higgins delivered what many interpreted as a rebuke to Mr Casey, who had criticised Travellers and a culture of welfare dependency during his campaign.

“The people have made a choice as to which version of Irishness they want reflected at home and abroad. It is the making of hope they wish to share rather than the experience of any exploitation of division or fear.”

As the results of the election continue to reverberate, Fianna Fáil firmly rebuffed approaches by Mr Casey.

Mr Casey, who won his unexpectedly large share of the vote after criticisms of Travellers, said he intended to join Fianna Fáil and lead the party back to Government.

“I am joining Fianna Fáil. I intend to run in the next general election in Donegal. And I am becoming a Fianna Fáil TD with a view to becoming taoiseach, as the head of a renewed and revitalised Fianna Fáil,” he told the Sunday Independent.

The Sinn Féin leader Mary Lou McDonald scrambled to contain the fallout from the poor performance of Liadh Ní Riada, who won just 6 per cent of the vote. She defended her decision to run a candidate, though acknowledged that many Sinn Féin supporters voted for Mr Higgins.

Asked about Ms Ní Riada’s declaration that she would wear a poppy on Armistice Day if elected president, Ms McDonald said Irish nationalists and republicans did not wear poppies.

She described them as a highly contentious symbol, but she said she respected the fact that Ms Ní Riada answered the question honestly and to her best judgment.