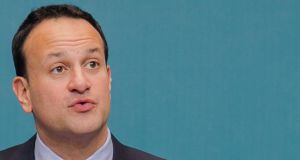 The leader of the Labour Party was not happy with the conduct of Leo’s officer corps. There was a lot of unseemly smirking and sniggering going on in the Government benches.

Ministers were slightly giddy, as they tend to be after a routine exchange of hostilities between the Taoiseach and Mary Lou McDonald.. The Sinn Féin leader attacks the Government and Leo Varadkar responds with an attack on her party.

The Fine Gael side of the chamber loves it when he does this. The more he insults the Shinners, the giddier they get.

Leo and Mary Lou’s latest set-to was drawing to a disorderly close on Tuesday afternoon when Brendan Howlin’s turn to take the floor at Leaders’ Questions came around. The usual suspects were still bellowing at each other after the Taoiseach rolled out his stock line about Sinn Féin having an almighty cheek to criticise the health service here when their party had a chance to improve the health service in the North and made a hames of it.

The Ceann Comhairle was attempting to calm the situation when the Labour leader began.

He sounded like he was doing an Enda Kenny impression. (Brendan Howlin, not the random man he met in Cork.)

The Fine Gaelers, still buzzing from the row, started to laugh.

“I met a man in Cork yesterday who is working in that city but can’t afford to pay rent in that city.”

“Do you think that’s funny, Minister?” he said, looking towards the ministerial ranks where most of the incumbents were smirking. “I don’t. He didn’t.”

They shut up and settled down.

Howlin talked about the impact of rent control zones on the housing market in Cork city and said it has become so expensive that people have to move further and further away from their work to find affordable housing.

These long commutes were also raised by Michael Collins of the Rural Independents Group, who said there was no proper public transport system for people who wanted to get to the city from west Cork. He suggested a park-and-ride point in Clonakilty would go a long way towards alleviating the terrible traffic congestion on roads into the city.

“This, if properly run, could have linking buses from Skibbereen to the Mizen, and from Dunmanway through to Bantry to the Beara and Sheepshead Peninsula and could also cater for the people of Bandon, Innishannon and surrounding areas on its way to Cork.”

Mindful, perhaps, of the giggling which greeted Howlin’s anecdote about the fella from Dunmanway, the Taoiseach greeted Collins’s question with unusual enthusiasm.

“Thanks very much, Deputy. I’m delighted that Cork is getting so much attention on Leaders’ Questions today. We have great ambitions for the beautiful second city,” he smarmed.

People of Cork, start procreating now! Your government demands it.

As for the park-and-ride system, which sounds like a very sensible idea, the Taoiseach said he would raise it with the different transport authorities. Which won’t give any great comfort to the car-bound commuters of west Cork.

Then he introduced the Dunkettle roundabout. “And anyone who knows Cork will know the kind of congestion that is faced at the Dunkettle interchange.”

Simon Coveney, seated next to him, nodded.

With the mentions of the roadworks at Dunkettle, more road works on the N28 and N22, the possible introduction of light rail and travel times in the county, the only thing the Taoiseach didn’t do was sign off his answer with “Leo Varadkar, AA Roadwatch”.

Meanwhile, people of Cork, keep making those babies. The Taoiseach repeated his Government’s hope that the population of the southern capital will double in the next two decades. “Our ambition” is “to ensure that it grows at twice the rate of Dublin.”

Then he said something sure to swell the hearts of Leesiders everywhere pining for a few more All-Ireland titles.

“We have an opportunity in Cork to learn from the mistakes made in Dublin, to get it right.”

Proper order, boy. Let the Dubs make all the mistakes and then let the Cork people do it properly.

So a lot of talk about Cork at Leaders’ Questions but none of the national children’s hospital, which had been expected to figure strongly.

Instead, it came from Mattie McGrath via the plinth. He addressed the media at a pre-arranged briefing on the PwC report into the spiralling cost of the new hospital. Except the report had yet to land.

But no bother to the mainstay of the Rural Independents Group.

“It’s only thoughts – we don’t have it, obviously,” said Mattie, pointing out that the report was 10 days overdue and an estimated €150,000 over budget.

“But look: in any case it’s a whitewash.”