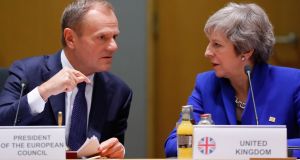 EU leaders are likely to agree to a further extension of the Brexit process when they meet next week but are divided on whether to grant a short extension – as requested by UK prime minister Theresa May – or a longer period that opens the door for a possible reversal of Brexit.

High-level sources in Dublin and Brussels say discussions continue at European level with some countries, notably France, opposed to a long extension and continuing UK involvement in EU decision-making.

However, they expect that the outcome will be a long extension with conditions attached.

Fears that a future prime minister from the Brexiteer wing of the Conservative Party could disrupt EU business, such as selecting the next European Commission and approving the next seven-year budget, were heightened yesterday when leading Brexiteer MP Jacob Rees-Mogg suggested that the UK would block EU decisions if it remained in the bloc.

A meeting of EU ambassadors in Brussels yesterday heard objections to a long extension and the idea of a “flextension”, where the UK stays in until it has passed the withdrawal agreement and the necessary legislation and then leaves.

Dublin is likely to favour a longer extension, although Minister for Foreign Affairs Simon Coveney said last night the Government was open to either a long or short extension.

Brussels sources said Ireland has not taken a strong stance either way, although officials said that extending article 50 for 12 months, or perhaps to the end of the year, would allow time for a general election and perhaps a second referendum in the UK – with the possibility that Brexit could be abandoned altogether.

Speaking in Limerick yesterday, Taoiseach Leo Varadkar said: “Perhaps a longer extension might make more sense but that’s something I’d have to talk about with other heads of government and also prime minister May.

“We’ll make a decision next Wednesday.”

Yesterday Mrs May wrote to Donald Tusk, president of the European Council – the group of EU heads of government – seeking another extension to the article 50 process, this time until June 30th.

Crucially, Mrs May said the UK would begin preparations to hold European Parliament elections at the end of May if it had not left the EU by that point – a condition laid down by EU leaders at the last summit.

Mrs May still hopes she can pass the agreement and then the necessary legislation in the House of Commons before the European elections, at which point the elections would be cancelled.

However, Mrs May’s efforts to agree a way forward with the Labour Party suffered a blow yesterday when talks between her negotiators and Labour representatives broke up without agreement.

UK government sources have briefed they will not accept such a condition.

Yesterday, Labour said Mrs May’s aides had “not offered real change or compromise” but left the door open to further talks over the weekend or next week.

There will be frantic diplomatic and political contacts in the coming days as EU leaders seek to agree a position in advance of next week’s emergency summit. The EU’s chief Brexit negotiator, Michel Barnier, will visit Dublin on Monday to meet with the Taoiseach and Ministers.