Hayes and Childers elected in Dublin after recount

A weary but ever pragmatic Green Party leader Eamon Ryan is at the re-count of his vote for Europe this afternoon at the RDS in Dublin. Video: Daniel O' Connor

Lynn Boylan has topped the poll for Dublin in the European election count at the RDS. The Irish Times was there to follow the actio. Video: Darragh Bambrick

Luke Ming Flanagan looks set to take a seat in the Midlands NW for the European Elections. At the Count Centre in Castlebar he speaks of the impact of Twitter and Facebook, as well as running 10k races in his election campaign. Video: Bryan O'Brien 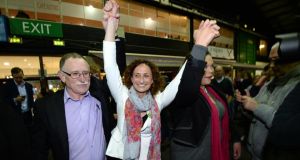 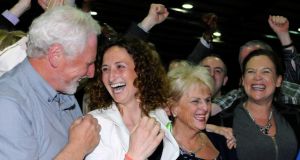 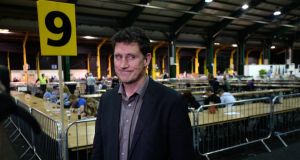 A pensive-looking Eamon Ryan the recount of the Dublin European elction in the RDS. The Green Party leader sought a recount after the seventh count early this morning. Dara Mac Dónaill/The Irish Times

Mr Ryan asked for a recount in the early hours of Monday morning. This took place this afternoon.

Speaking on the RTÉ News at One this afternoon Mr Ryan said he felt it was right to do so given that the count had gone on until 4am.

“The democratic process is important, making sure that votes are absolutely right,” he said.

Lynn Boylan of Sinn Féin was the first candidate declared elected shortly before midnight last night at the RDS in Dublin following the third count.

Ms Boylan secured more than 83,000 first preference votes. A large crowd of Sinn Féin supporters cheered the announcement which took place in the RDS in Dublin.

People Before Profit’s Bríd Smith was eliminated after the second count while Socialist Party candidate Paul Murphy was eliminated on the next count and his votes transferred to other candidates.

Following the elimination of the Labour Party’s Emer Costello, the race for the remaining two seats swung towards Fine Gael’s Brian Hayes on 63,591 votes, and the Green Party’s Eamon Ryan on 53,179 who pulled away from Fianna Fail’s Mary Fitzpatrick.

The seventh count involved the division of Ms Boylan’s surplus of 1,620 votes following the elimination of Mary Fitzpatrick of Fianna Fáil after the fifth count.

Entering the seventh count, Brian Hayes of Fine Gael was 904 votes ahead of independent Nessa Childers and Mr Ryan was 504 votes behind at which stage Mr Ryan requested a recount which was then scheduled for 2pm today.

Lyra McKee: The search for a lost body on Cave Hill