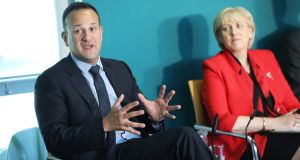 Taoiseach, Leo Varadkar and Minister for Business, Enterprise and Innovation, Heather Humphreys at the conference in the Aviva stadium in Dublin.

Irish small and medium enterprises (SMEs) are weak or underperforming in a number of key areas , a report has found,

These include exports, internationalisation, digitalisation, innovative collaboration, and financial skills, according to a review by the Organisation for Economic Cooperation and Development (OECD).

The report recommended doubling the value of exports from outside the UK, to have an action plan to improve financial skills in SMEs, and to initiate a major digitalisation drive.

Ulrik Vestergaard, the OECD deputy general secretary told the Future Jobs Ireland conference in the Aviva stadium on Friday that only 6.3 per cent of Irish SMEs export, a low number compared to other EU economies.

At the conference Taoiseach Leo Varadkar and Minister for Business Heather Humphrey’s announced a new policy for the growth of the SME sector as part of its Future Jobs strategy. The policy is partly based on the findings of the OECD report.

Kris Boschmans of the OECD said productivity in the SME sector has been in decline in recent years.

Mr Boschmans told the audience, comprised of SME interests and policy-makers, that it was “a bit surprising to see that so few Irish SMEs are internationally active” and that start-up rates in Ireland were also below the OECD average.

Ireland was also found to be weak in business collaborations and innovative “clusters”.

The German state secretary for economic affairs, Claudia Dorr-Voss said 87 such clusters had been established in Germany, with 15,000 institutions and 10,000 SME companies involved.

Another major finding was a poor international dimension to Irish SMEs and its strong reliance on the UK market.

The OECD said improved schemes were required including vouchers, grants and support to irregular exporters.

It set a target of increasing the proportion of exporters from 6.3 per cent in 2016 to 9.6 per cent in 2025. It also recommended doubling the value of exports for markets other than the UK.

Tackling the problems small businesses have in securing finance, it said the current programmes were “quite modest”. There was a need, it recommended, to scale up credit access programmes for SMEs as well as giving better access to microfinance.

SMEs had a lack of trust in financial institutions, the OECD found, and, for their part, banks said there was a lack of financial knowledge among SMEs. The solution, according the OECD team, was an action plan with training programmes to raise financial skills of small business owners.

Digital skills in SMEs and among the general population were weak, the researchers found. This was a complex area to address but one way suggested was a digital growth panel, which had been pioneered in Denmark.

Ms Humphreys announced two new funds, worth €3 million, to address productivity through the Local Enterprise Offices. She said supporting micro-businesses in even the most rural areas was the key to the policy’s success.

“In recent years we have seen a decline in productivity in indigenous SMEs,” she said. “We want to close this gap.”

Mr Varadkar said: “I come with one simple message. If we are to have the economy and society we want in 2025 – low carbon, high productivity, high tech, family friendly, globally traded and competitive - we need to create the environment where that is possible.”