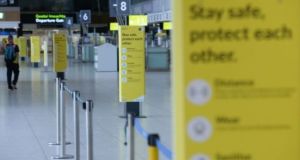 Countries on the green list that are not linked by direct flights include Greenland, Gibraltar, Monaco and San Marino

Travel insurers have called for greater clarity on what the official advice on overseas travel is and whether or not non-essential travel to the so-called green list countries will be permitted without any cautions or obstacles.

The list comprises 15 countries now considered safer to travel to than other countries.

There have also been concerns expressed about how some countries have made it on to the list when it is impossible to travel to them without going through countries that are not on the list.

It is impossible to travel to Gibraltar or Monaco without going to either France or Spain, countries that are not on the list. People can go to and from Greenland and San Marino via Norway and Italy, which both feature on the list.

David Hughes, operations director of travel insurance provider getcover.ie, highlighted the anomaly and said there was a lot of confusion around actually getting to some destinations on the green list.

“Monaco is listed, yet France isn’t. To get to Monaco one must fly to France, as in Nice. Is it therefore possible to actually travel to Monaco? Likewise for Gibraltar. There are no direct flights from Ireland to Gibraltar. One would need to travel via Spain”.

He also expressed concern about how travel insurance cover will be managed in the weeks ahead.

Until last night the Department of Foreign Affairs (DFA) had a blanket advisory warning against non-essential travel outside of Ireland. Such a warning meant anyone who disregarded it would automatically void any travel insurance they had,

However with the publication of the green list, countries on it including Greece, Italy and Malta now have the lowest advisory level which says “general precautions”.

Generally speaking that should mean that people who travel to such places will have keep the safety net of travel insurance but the DFA has also retained a blanket advisory against all overseas travel.

“Insurers have a moral obligation to follow Government guidelines and therefore cannot insure against the greater good, as such, clarity is required from the Government regarding travel advice currently listed on the DFA website,” he said.

He said it appeared as if “the statement surrounding the Green List was made without preparing the necessary supporting guidance and advice. We are currently in discussions with our underwriters and have contacted the Department of Foreign Affairs for guidance. We hope that clarity on this situation will be provided ASAP”.

Ciaran Mulligan, managing director of Blue Insurance, echoed those concerns and said his company was having discussions with insurers and “hope to have clarity on whether insurance will be valid some time on Wednesday”.

He stressed, however, that insurance is not the basis on which the Government gives travel advice – stressing it is instead decided “on the basis of risk”.

The country that is likely to benefit most from appearing on the list is Italy. According to figures from the Central Statistics Office (CSO), the number of Irish people who travel to Italy between July and September is around 170,000. By comparison, around 550,000 people travel to Spain, while just over half a million people take trips to Britain.

36 hours on Northern Ireland’s Causeway Coast: ‘Everyone is having a wild time’
4