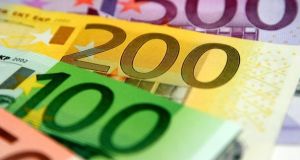 Economist Jim Power said the VAT refund scheme contributes €108 million to the economy, with a large proportion of this spent outside Dublin

The Government has reduced the value threshold for VAT refunds on goods bought in the EU and exported overseas in order to help retailers affected by the coronavirus pandemic.

Under existing rules, when Brexit comes into effect and the UK becomes a third country, visitors from Britain can avail of the VAT retail export scheme enabling travellers outside the EU to benefit from VAT relief on goods purchased in the State and brought outside the EU.

Concerned about Britain’s proximity and the risk of the scheme being abused, the Government’s Brexit Omnibus Bill limited the scheme to qualifying goods exceeding €175.

Visitors from Britain could buy goods in Ireland and bring them back to the UK and save on the cost of the product by claiming a VAT refund back from the Irish exchequer.

On Tuesday, the Cabinet agreed to reduce the minimum purchase threshold to €75 “to ensure that Irish retailers are supported in this extraordinary time”, the Department of Finance said.

Minister for Finance Paschal Donohoe said that, by excluding goods below a certain value from the scheme and requiring proof of declaration of importation into the UK for goods eligible for a refund, he intended to ensure that the scope for abuse was minimised.

Mr Donohoe said the amendment reducing the value of eligible goods would help retailers, especially businesses in the tourism sector, during the current challenges facing the sector.

The reduction “retains protections for the exchequer while also acknowledging the potential impact that not making this change would have on retailers across the island”, he said.

Businesses behind a campaign called “Stop Another Tourism Tax” said the changes were “wholly inadequate” and will be “a major blow for Irish tourism and retail at a time of crisis”.

Spokeswoman Freda Hayes, chief executive of Blarney Woollen Mills, is seeking an urgent meeting with Mr Donohoe to hear how the department arrived at the €75 figure.

“Around 50 per cent of all transactions are under €75 and this will still be a huge blow to small, independent retailers, especially along the Wild Atlantic Way, who don’t sell high-value items,” she said.

Economist Jim Power, who is advising the group, said the VAT refund scheme contributes €108 million to the economy, with a large proportion of this spent outside Dublin.

The €75 threshold does not represent support, he said, and “would in fact damage Ireland’s competitiveness and decimate the Irish tourism and retail sectors”.