Oireachtas to focus on Garda association once Templemore irregularities reported on 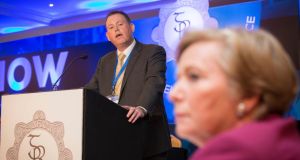 The Oireachtas Committee of Public Accounts is to investigate alleged spending on hospitality and holiday vouchers by the partly State-funded Garda Representative Association.

The committee’s chairman, Seán Fleming, said it would on Monday begin to draw up its interim report on financial irregularities at the Garda College, in Templemore, Co Tipperary. But he added that the committee was aware of other issues and reports and would consider these in September. They include the annual report of the Comptroller and Auditor General on the Garda Síochána and two other internal-audit reports due over the summer, as well as files on GRA spending.

Internal GRA files reportedly show the organisation issued at least €10,500 in holiday vouchers, in amounts ranging from €1,000 to €5,000, to executive members and advisers.

The association, which represents rank-and-file gardaí, receives €20 a month from each of its 10,500 members, totalling almost €2.5 million a year. It also receives State funding of about €125,000 a year.

The Social Democrats TD Catherine Murphy, who sits on the Oireachtas committee, said the reported spending “makes it look like the Celtic Tiger never went away”.

Ms Murphy said that it was gardaí’s responsibility to ensure subscription income was properly spent and accounted for but that she and other members of the committee would have concerns about how the association’s State funding was spent.

“I meet gardaí who are struggling to pay their mortgages, and that €5 a week on subscriptions means something to them,” the North Kildare TD said, adding that they would be interested in and surprised by how that money was being spent.