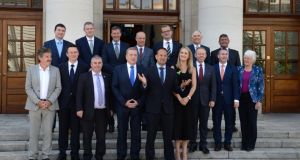 Taoiseach Leo Varadkar was unable to mine a potential seam of female talent for ministerial appointments because of his self-imposed ban on promoting TDs selected for the first time in 2016.

First-time TD Maria Bailey, who was a supporter of Mr Varadkar’s leadership rival Simon Coveney, said Tuesday had been a “disappointing day” because of the poor gender balance in the junior ministerial ranks.

“It’s really disrespectful to discredit what anybody did before 2016. We all bring life experience and skills. They can’t possibly say the class of 2016 doesn’t come with experience and motivation,” she said.

“We have to give young girls coming through the opportunity to get into politics. You can only make that tangible if you see women at the top, not on the backbenches.”

Outside Leinster House women are not a minority group. Inside, things are different.

Fine Gael has more women TDs than any other party, with 11 female deputies out of 50.

Women across party lines in the Dáil speak well of Mr Varadkar. While some obviously know him better than others, “approachable” is a common word used to describe the new Taoiseach. But the co-leader of the Social Democrats, Catherine Murphy, said she was taken aback at his decision to choose only three women among his team of 19 Ministers of State.

“The glass ceiling has just come down a notch. It’s demoralising to see that,” Ms Murphy said.

“It’s an obvious thing to say, but women are not a minority. It sends a message out: You can go so far but no further.”

Mary Mitchell O’Connor was demoted to “super junior” level, meaning she has a seat at the Cabinet table but does not have a vote.

“You have to take radical, decisive action in order to correct it and he [Mr Varadkar] wasn’t prepared to do that

Marcella Corcoran Kennedy lost her junior ministerial post on Tuesday, provoking dismay on the backbenches, while Catherine Byrne and Helen McEntee were retained as reshuffled Ministers of State.

The other four women are new TDs.

Political leaders from previous generations, such as Dick Spring and Bertie Ahern, have cautioned against promoting first-term deputies on the grounds that they need to “learn the ropes” in Leinster House for a few years before advancing. However, Ms O’Connell said the proportion of female representation will not simply grow organically.

“You have to take radical, decisive action in order to correct it and he [Mr Varadkar] wasn’t prepared to do that.”

She said she was sure it had not been easy for the Canadian premier Justin Trudeau and French president Emmanuel Macron to compile cabinets with equal numbers of men and women, but it was “courageous”.

There were a few signals on Wednesday that Fine Gael was feeling sensitive about the media coverage highlighting the lack of gender balance in Mr Varadkar’s ministerial line-up.

Around noon, the press office released a statement saying Fine Gael had done more than any other party in terms of gender equality in politics. The statement pointed to the fact that Fine Gael had introduced gender-quota legislation, cutting funding for political parties if they failed to field at least 30 per cent of candidates who were women at the general election.

Earlier, Mr Varadkar told Senator Catherine Noone she would be the person to chair the Oireachtas abortion committee, when prior to that the only name circulating was that of Senator Jerry Buttimer.

Some people close to the Taoiseach had wanted Mr Buttimer in the post as he had led the Oireachtas committee that held hearings on the Protection of Life During Pregnancy Bill four years ago.

Women in office – by the numbers:

Out of 33 senior and junior ministers, seven are women (21 per cent)

Man jailed for welfare fraud admits to further €18,000 false claim in benefit 21:15
Fine Gael says it will roll out free GP care to everyone under age of 18 by 2025 20:59
PSNI’s Deputy Chief Constable set to retire at end of month 20:50
New code to cap salaries of special advisers to North’s Ministers 20:39
Gardaí making ‘good progress’ on Cork attack where man was set on fire 20:24
SUBSCRIBER ONLY