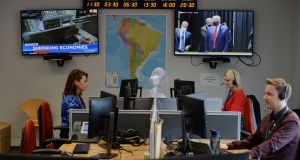 Passport service staff who have been redeployed to work in the Covid-19 consular crisis centre. The Government is likely to seek that flexibilities, such as redeployment provisions introduced as emergency measures during the Covid-19 crisis, should become permanent as part of new modernisation and productivity arrangements. Photograph: Alan Betson

The Government is expected to seek a pay pause for about 340,000 State employees for a significant part – potentially the first year – of any new public service agreement reached with trade unions.

In talks which will get under way on Wednesday, the Government is also likely to seek that flexibilities, such as redeployment provisions introduced as emergency measures during the Covid-19 crisis, should become permanent as part of new modernisation and productivity arrangements.

The Government is also likely to look for stronger dispute resolution measures to avoid strikes or industrial unrest in the public service.

Key issues for unions entering the new process will include a rolling back of the requirement for staff to work additional unpaid hours which were introduced as part of the Haddington Road public service accord in 2013. The duration of these additional hours varies from sector to sector.

Unions are expected to press for provisions in a new agreement which would allow for specific grievances or issues affecting particular sectors or areas of the public service to be resolved.

Unions have not accepted the concept of a pay pause – which was first floated by the Department of Public Expenditure in preliminary talks with representative groups some weeks ago. Unions have argued that a realistic and acceptable approach to pay has to be put forward by the Government.

However, it is expected that the Government will propose a pay pause for a significant element of the early part of any agreement – potentially for the first year of an agreement which could run for 24-30 months.

While pay is likely to attract a lot of focus, the additional working hours under the Haddingon Road accord could prove to be a major issue given the costs involved, particularly in the health and justice areas.

In 2017 the Department of Public Expenditure estimated that the abolition of the additional working hours could cost about €620 million, although this is disputed by unions.

The Cabinet on Tuesday decided to invite unions to take part in negotiations on a new accord to succeed the existing public service agreement which will expire at the end of December.

The Public Services Committee of the Irish Congress of Trade Unions (Ictu) also backed entering into talks with the Government at a meeting on Tuesday.

Minister for Public Expenditure Michael McGrath suggested the forthcoming talks would be “difficult” against a very challenging backdrop. “Any agreement has to be appropriate to the context the country is currently facing and must be sustainable in the face of considerable economic uncertainty.”

The committee, which represents all Ictu-affiliated unions with members working in the civil and public service, said it had decided it would accept an invitation to formal negotiations received from the Minister for Public Expenditure and Reform.

Last week the country’s largest public service union Fórsa said that a “realistic and acceptable approach to a new public service agreement does not mean ruling out pay improvements over the lifetime of a deal”.

The union also said it wanted to make it “crystal clear” that rolling back the additional unpaid hours introduced for public service staff in 2013 would have to be “an essential element of any new agreement”.

The organisation representing military officers – which is not affiliated to Ictu – said on Tuesday that before it could accept the invitation to take part in the new process it needed to see the parameters that had been agreed between Government and the unions, including the basis on which agreement was reached for the formal talks to start. RACO said it was “concerned about entering a process where the outcome may have already been decided”.