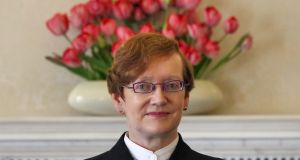 The Government has declined to say how the nomination of the outgoing Attorney General Máire Whelan to the State’s second highest court, the Court of Appeal, came about as one of the last acts of the Enda Kenny administration.

The Irish Times understands that most Ministers were not notified of the proposed appointment before the final Cabinet meeting on Tuesday morning, and that outgoing minister for justice Frances Fitzgerald and Minister for Transport Shane Ross – who has previously raised objections to judicial appointments as “jobs for the boys” – were only informed by Mr Kenny immediately before the Cabinet met.

The Government’s official spokesman said the appointment of Ms Whelan was not in accordance with a previous convention where the attorney general had first refusal on any senior judicial appointments that arose.

This convention was last used when Harry Whelehan was appointed to the High Court in 1994 – a row that eventually led to the fall of the Fianna Fáil-Labour government.

However, the Government spokesman was unable to say how the appointment had come about. He said Ms Whelan was nominated in accordance with the Constitution and because she was “available and qualified”.

The Department of Justice said the Judicial Appointments Advisory Board (JAAB) had not recommended anybody for the post. Ms Whelan is a member of the board.

A spokesman for Mr Ross said that he had expressed his concerns about the appointment.

However, Mr Ross was pleased when the Cabinet approved a decision by Garda management to re-open Stepaside Garda station in his constituency, a move he had long sought.

Mr Ross had banners erected in his constituency, and a mailshot, on official notepaper through the free postal service for TDs and Ministers, was sent out immediately after the Cabinet decision, arriving at the homes of voters in the area yesterday morning.

In the letter, Mr Ross said he has been “fighting this closure for the last three and a half years”.

Opposition TDs accused him of trading his objection to judicial appointments for the opening of the station.

Speaking in the Dáil after Fine Gael leader Leo Varadkar was nominated Taoiseach, Mr Martin said it was essential that the “controversy” was addressed.

“The excuse that there were no qualified applicants is clearly false given that the last application process closed nearly six months ago, and there was no public advertisement of this vacancy,” Mr Martin said.

Ms Whelan has been at the centre of a number of controversies as attorney general, though she was extremely close to the former taoiseach, Enda Kenny.

The most serious controversy was when it emerged in the reports of the Fennelly Commission that she had given two different versions of events while giving evidence under oath.

In 2014, Ms Whelan told the commission she had given the taoiseach an alarming account of the taping of phone calls at Garda stations, warning him of widespread illegality by gardaí.

A year later, however, she changed her evidence. The report was also critical of other aspects of her behaviour, including her refusal to inform the then minister for justice, Alan Shatter.