Government preparing to sack Creighton over opposition to Bill 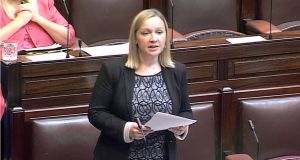 Lucinda Creighton, who delivered an uncompromising speech to the Dáil yesterday, saying she could not support draft laws “built on sand”

The Government was making tacit preparations last night to sack Minister of State Lucinda Creighton if she voted as expected against the abortion legislation. Such a move would be quickly followed by the appointment of her successor.

Ms Creighton delivered an uncompromising speech to the Dáil yesterday, saying she could not support draft laws “built on sand”.

Having left little scope for herself to turn around and vote for the Protection of Life During Pregnancy Bill, the speech was seen within the Coalition as a parting shot by a junior minister who was about to lose her job.

With the final Dáil debate and subsequent votes expected to continue very late into the night, it was anticipated in Government circles that Taoiseach Enda Kenny would wait until today to respond to any defiance of the Fine Gael whip by Ms Creighton.

In a strict legal sense it falls to the Government to remove and appoint Ministers of State. This essentially means the Cabinet must be convened to remove Ms Creighton from office and appoint her successor.

It was emphasised last night that no definitive course of action would be set in motion until such time as the Minister of State actually voted against the legislation if that was what she did.

First-time TD Mr Donohoe emerged early as the favourite to succeed Ms Creighton. Mr Flanagan might be an option if the Taoiseach was to opt for a deputy of longer standing. So too would Mr English, who was first elected in 2002 and who was a contender to fill the junior agriculture ministry left vacant by the late Shane McEntee.

One option mooted last evening was to make Mr English Minister of State in another portfolio and move the incumbent into the European Affairs post. Whether Mr Kenny had any appetite for a mini-reshuffle in the lower tier of his administration remained unclear last night.

Mr Buttimer’s deft stewardship of the committee’s hearings on the legislation led to his name being mentioned.