Give Me A Crash Course In . . . Michael Lowry

What was he convicted of this week? Why was he described as ‘conscientious taxpayer’? 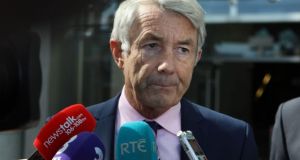 What was Michael Lowry convicted of this week?

He and his company Garuda were found guilty of delivering incorrect corporation tax returns and failing to keep proper books of account. Garuda is Lowry’s refrigeration company and the offences arose in relation to the company’s 2006 accounts. Lowry was fined €15,000 and banned from operating as a company director for three years. Garuda was fined €10,000. Why did he seem jubilant coming out of court and describe this as a “fantastic result”? He was facing other charges that the jury failed to arrive at a decision on, as well as an income tax charge that was dropped during the trial. The charges he was found guilty of carried a maximum sentence of five years in jail but Judge Martin Nolan said he did not think a custodial sentence was appropriate. “I came into this building a free man and I leave this building a free man,” Lowry told reporters afterwards outside the Criminal Courts of Justice in Dublin.

Why did Lowry say this marked the end of 22 years of being pilloried and vilified?

That’s not entirely clear but it was 22 years ago that Lowry had to resign from government following the disclosure in the Irish Independent that Ben Dunne had paid £300,000 towards the renovation of Lowry’s home in Holycross, Co Tipperary. The money had been invoiced within Dunnes Stores as being for the renovation of its outlet in the Ilac Centre in Dublin.

This led in time to the the McCracken and Moriarty tribunals, and to Revenue and company law inquiries into Garuda. In 2007, Lowry and Garuda agreed a €1.4 million settlement with the Revenue.

But why did Judge Nolan describe Lowry as a “conscientious taxpayer”?

Because back in 1997 Lowry had remortgaged his home and paid money from his own pocket to help Garuda deal with the Revenue. The company employs about 30 people in Thurles.

What has all that got to do with this week’s trial?

In 2013, the Sunday Independent published the details of a 2004 conversation between Lowry and a Northern Ireland land scout called Kevin Phelan, during which there was talk of a £248,624 payment from Lowry to Phelan in 2002 which had not been declared. The conversation had been secretly recorded by Phelan. This payment was commission that Lowry/Garuda were owed by a Finnish company called Norpe for refrigeration services sold to Dunnes Stores. Lowry arranged that the money go to Phelan instead of Garuda. It went to an Isle of Man entity called the Glebe Trust, which is associated with Phelan. Lowry has said he owed money to Phelan.

The reason this is interesting is that Phelan acted as a land scout for property deals in England in the late 1990s that the Moriarty tribunal decided were designed to confer a financial benefit on Lowry from Denis O’Brien. The tribunal linked the transactions to the 1995 mobile phone licence competition, which was won by O’Brien’s Esat Digifone when Lowry was minister for communications.

Lowry and O’Brien paid money to Phelan on other dates in 2002 which they said were fee payments due to the land agent. However, the tribunal decided the main reason for the payments was to ensure Phelan didn’t undermine false evidence that had been given to the tribunal about the land deals. In 2016, a judge in the High Court summarised this as bribes to a potential witness. Phelan never gave evidence to the tribunal.

Lowry and O’Brien dispute the tribunal’s findings. The tribunal was never told by Lowry about the Norpe payment.

Following the 2013 report about the Lowry tapes, the Revenue launched an investigation. The culmination of this was the two-week trial that ended on Tuesday. The offences occurred when, in 2007, Lowry was inserting the £248,624 payment that had not been recorded into the Garuda accounts for 2006.