Labour leader says work essential to recovery; Would prefer not to lose members 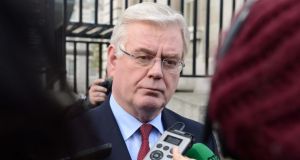 Tánaiste Eamon Gilmore today said he was happy to continue in the Department of Foreign Affairs Photograph: Eric Luke / The Irish Times

Tánaiste Eamon Gilmore today said he was happy to continue in the Department of Foreign Affairs and insisted that his work there was vital to the country’s economic recovery.

The comments by the Minister for Foreign Affairs come amid concerns among some Labour Party members that he should return to a domestic ministry.

“When we came into government two and a half years ago, we were referred to as one of the PIIGS, our reputation was in tatters but we had to restore that. That was primarily my job as Minister for Foreign Affairs and I’m very glad we have restored it,” he said.

“The work that my department does and the state agencies do is critical to the economic performance of this country and I reject entirely any suggestion that it’s somehow not a domestic issue and that it’s not related to the success of the economy.”

Mr Gilmore said that it was usual in the lifetime of any government that there would be changes within Cabinet and that was something the Taoiseach Enda Kenny would address. Mr Gilmore would not be drawn further on whether he would welcome a move from foreign affairs.

“Opinion polls don’t necessarily predict the outcome of general elections, presidential elections or local elections - that’s said, there isn’t a politician that wouldn’t prefer to see opinion polls going up rather than going down.

“But I’ve never been under any illusion but that we have had a difficult job to do since we went into government .... At the end of the day, I don’t believe that the Irish electorate will punish the Labour Party and reward Fianna Fáil who got us into this situation.”

Asked about the recent resignations of Labour Party public representatives in Wicklow, Dublin and Kerry, Mr Gilmore paid tribute to those who had opted to remain with the party through what he conceded was the making of some very difficult decisions.

“The vast majority of the public representatives of the Labour Party show great courage and great determination to get this country out of the mess we inherited and I am praising those members that are sticking with the Labour Party.

“They are showing courage and determination at a very difficult time. But the vast majority of members are determined to stick with it. I would rather not lose anyone...but we have had a difficult job to do and will continue to do it.”

Asked about whether the Government would work to have a back-up line of credit available when Ireland exits the bailout on December 15th, Mr Gilmore said that that still has to be decided up by the Government.

“We are in the fortunate position that the state is now well funded as we’re about to exit the bailout - the precise way of how that will happen and the precise arrangements made with the lending bodies is something the government has yet to make a decision on,” he said.

“The troika leaving is Labour’s way, Frankfurt’s way was having the Troika still with us,” said Mr Gilmore who was speaking in Cork where he presented Dan and Linda Kiely of Vox Pro with the Cork Business People of the Year Award for 2013.

When will we be able to travel again? ‘October is the new July’