From Dalkey to Drumcondra, Dublin fans feel the hand of history

‘The cycle of Dublin’s success will end,’ says sports historian. Yes but not on Sunday, supporters insist 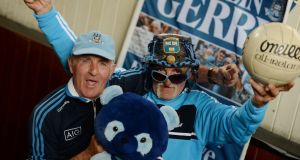 Peter Lawlor and Gerry Gowan, aka “Dublin Gerry”, pictured in advance of the All Ireland final. Photograph: Alan Betson / The Irish Times

It wasn’t an accurate portrayal then, and it’s certainly not now.

Professor Paul Rouse of UCD, an authority on the history of the games, says the suburbanisation of Dublin, plus the arrival into the capital of young parents from GAA backgrounds, led to burgeoning growth in areas that were once exclusively soccer or rugby territory.

“Look at Castleknock (Ciarán Kilkenny’s club) which did not exist 25 years ago. There’s been a huge wave of suburban clubs which have added to the playing pool.”

One of those new breeds of club is Cuala in Dalkey. After earlier iterations, it was formally founded in 1974 as a junior club. Now, it has 1,600 playing members, and two All Ireland club hurling titles. Two of its players, Michael Fitzsimons and Con O’Callaghan, are on the Dublin senior team.

Late on Thursday night, the club distributed its 100-or-so All Ireland tickets by lottery. Well over 300 adult members crowded into the hall, and what was immediately noticeable was that half were female - a testament to the association’s inclusive nature.

Former player Fionán Breathnach points to the success of the club’s academy: “There was a committed group of people with a natural love of Gaelic games. The young people who came through the academy are all the backbone of the club. They really put the GAA club on the map in an area that was not traditional for us.”

The more traditional clubs have survived and thrived too under Dublin’s transformation. Naomh Fionnbarra in Cabra is 75-years-old this year. It grew up with the suburb, built after the World War II to house people from the North Strand whose homes were bombed.

“We have so many playing now that we have trouble getting mentors,” says club official Shane Langan. “We are proud Dublin GAA people. Our big thing is we are community based and very family oriented.”

Of Dublin’s drive-for-five, Langan says:“I don’t want to get cocky. I’ve found myself getting a bit nervous over the past few days. Everyone says we are going to win it, it’s just put me on to the fence a little.”

Rouse, a former Offaly football manager, is in no doubt about this record-chasing team’s ability but he insists: “The cycle of Dublin’s success will end. That’s the way sports works. Everyone was saying the Kerry team were untouchable until they were beaten in 1982.”

He believes, though, a conversation will have to take place soon about the country’s changing demographics and its impact on the GAA.That’s for another day.

In Cabra, none of the Dublin faithful is looking beyond Sunday. Rose McAuley, who has made her house and its garden into a shrine for the Dubs, with the pillars painted in hues of blue, says she has been following the team since the 1970s when you could shin over the wall to get onto Hill 16 for free.

“The atmosphere will be amazing. We are on our way to the five,” she says.

Another super-supporter is Dublin Gerry. His surname is Gowran but nobody calls him that - “just in case it ends up in a charge sheet!” he says.

From Drumcondra, the horse-and-trap driver has been following Dublin since 1958, the year Kevin Heffernan captained the side. He has just collected a personalised banner in Montague Street and is gearing up with his friend Peter Lawlor for the big game.

Gerry knows all the players, knows all the mentors. And they all know him. You couldn’t miss him. He will be rocking up to Croke Park in a special three piece suit in the colours.

His banner features an image of the late Anton O’Toole, the Blue Panther, who died earlier this year, a low-key and unassuming man.

That’s the thing about the GAA and its Dublin folk. They revel in the ordinariness of their superstars. They talk of Jim Gavin coaching an underage side in Round Towers. And of Declan Darcy doing the same in Clanna Gael. Naomh Fionnbarra played a match against Raheny recently. Who took the net down at the end of the game? None other than Brian Fenton, possibly the greatest midfielder ever to grace the game.

That’s the paradox about Dublin GAA on the cusp of five - in the stratosphere and grounded at the same time.