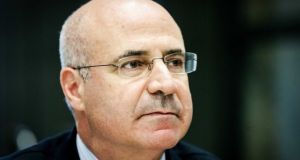 Ireland will become a haven for money launderers if it does not introduce new laws targeting human rights violators, the UK-based financier Bill Browder has said.

Mr Browder, who says he is an arch foe of the Russian president Vladimir Putin, will meet TDs in Leinster House later on Tuesday to discuss enacting an Irish version of the Magnitsky Act which is named after a Russian lawyer Sergei Magnitsky who acted for Mr Browder and died in a Russian jail in 2009.

The lawyer uncovered evidence that Russian officials were involved in a complex fraud and tax evasion scheme using assets stolen from the hedge fund. He was then accused of the crime himself and arrested.

Russia’s own human rights council said he was denied medical treatment and was probably beaten to death. Versions of the Magnitsky Act have been introduced in the UK, US, Canada, Latvia, Lithuania and Estonia.

Ireland was considering introducing a similar measure in 2013 but backed down after the Russian ambassador to Ireland said there would be trade consequences and a likely prohibition on the adoption of Russian babies by Irish citizens.

“Ireland should have an Irish Magnitsky Act. It is a piece of legislation that has already been passed in six other countries which bans the visas and freezes the assets of human rights violators.

“It has become a wide tool to sanction bad guys from all countries and the reason why Ireland should have it is it makes no sense if the UK has it, the US has it, Canada has it and Ireland does not. It would mean Ireland would become a haven for money launderers who would feel safe keeping their money in Ireland,” he told the Irish Times in an interview.

He said he almost had success in implementing the law in Ireland previously, but that an 11th hour intervention from the Russian ambassador halted its progress.

“It is a question of leadership really, capitulating to that type of threat means that Ireland is a weak country of appeasers, and the people I know in Ireland don’t want to think of themselves that way.

“Ireland is a plucky country. I thought Ireland would have been one of the first countries to enact the law give there are very clear values in the country between what is right and what is wrong.”

“The reason this tool is so valuable in terms of dealing with human rights abuses is that in the past sanctions would be placed on an entire country. You’d end up with everyone else punished and the perpetrators in private jets with caviar,” he said.

The Act would mean that instead of country-wide sanctions being imposed where there have been such human rights violations, the individuals themselves would be targeted.

Mr Browder will call on TDs to ensure that the legislation has Magnitsky’s name on it stating that the Russian Government has lobbied other countries to remove it.

Mr Browder, whose Hermitage Capital Management Fund was once one of the biggest portfolio investors in Russia, is a strident critic of the Kremlin.

“The Russians have put a big target on my back in terms of legal attacks, propaganda, disinformation. It is a constant battle. The angrier they get, the more it is a validation. The natural reaction when a guy like Putin goes after you is to shut up and go to ground. I am not going to do that,” he said.

“The important thing is to have a high bar to stand up any potential exclusion in case where human rights violations and corruption coalesce.”