Free GP care not a priority for austerity sadists

Column: It is much cheaper for the State to give people, especially those with chronic illnesses, free access to their GPs 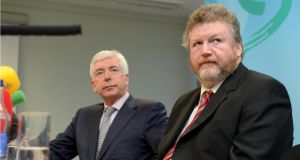 Alex White and Minister for Health James Reilly. “In spite of soothing noises from Minister of State Alex White, the fact is that nothing has been done after two-and-a-half years.” Photographer: Dara Mac Donaill

Suffering the pain of so-called austerity is bad. Listening to luxuriously upholstered State pensioners like John Bruton tell us that it’s all a matter of “creative destruction” is worse.

But worst of all is the sense that public policy is at the mercy of people who don’t actually know what fiscal responsibility looks like. They can only recognise control of public spending if they hear some little people squeal.

Last week, we learned that the Government doesn’t even have a back-of-the-envelope plan to implement its key promise to introduce free GP care in its first term of office. The first phase of this plan, free care for those on long-term illnesses, which was supposed to be introduced in the Government’s first year, has been abandoned.

In spite of soothing noises from Minister of State Alex White, the fact is that nothing has been done after 2½ years. This isn’t just a terrible failure of social policy. If the austerity hawks were half serious, they’d be hitting the airwaves to complain about an act of fiscal madness. Everything we know suggests that this failure will result in higher long-term costs to the State.

Nearly three years ago, a big official report on the costs of healthcare in Ireland (the expert group on resource allocation and financing in the health sector) cited the cases of two 59-year-old men. Both have high blood pressure. One is a relatively wealthy accountant . He goes to his GP for a check-up and takes three tablets a day. He’s in fine fettle, working, paying taxes, and in terms of healthcare, costing the State relatively little. The other man is a “small farmer whose income has always been just above the threshold for the medical card. He found attending his GP for monitoring of his blood pressure, which did not greatly affect his daily activities, expensive as were the tablets for the blood pressure.” So he does nothing. And then he gets a stroke.

The point is that the second man, the farmer, ends up costing the State vastly more than the accountant does. Apart altogether from the human costs of serious illness, his stroke is bloody expensive. Five years ago, the direct cost of treating the average stroke patient in the first year was €18,751 – not counting the large indirect costs of lost productivity (for the patient and family carers) and long-term disability. In 2010, the Irish Heart Foundation put the annual cost of strokes at over €1 billion. If the small farmer behaved like the accountant, the State would save a fortune. The reason he doesn’t do so is because of the high cost of visiting his GP.

Healthcare is a huge chunk of public spending and most of that spending is accounted for by long-term illnesses. Seventy per cent of all usage of the health system in Ireland is by people with chronic diseases. Everybody who’s thought about this at all realises that the only way to control these costs is to make sure that these conditions are managed at the lowest possible level – ideally by the primary care teams we’re supposed to have in our communities (or at least in those of our communities that James Reilly intuitively perceives to be most in need of them), but in any case by their local GP. Except that, uniquely in the developed world, there is no public or insurance-based subsidy for visits to GPs by those who don’t hold medical cards.

This has two effects. Many people with perfectly treatable conditions can’t afford to shell out €60 and don’t go to a doctor until the condition has become acute (and very expensive to treat). And many people who could and should be treated by GPs at relatively low cost to the State instead go to hospital outpatient departments to be treated by consultants at much higher costs to the State. (It’s not easy to get into an outpatient clinic for a chronic condition but when you do, it’s free.) As the expert group put it, “High pay-as-you-go GP charges are known to deter use of care, increasing the risk of later detection of medical problems, with the likelihood of higher costs in terms of healthcare in the longer term.”

There’s no serious dispute about this: it’s much cheaper to give people, especially those with chronic illnesses, free access to their GPs. Even the Government understands this very well. Just last November, in its health strategy document, it stated: “the removal of fees for GP care . . . is required because of the body of evidence that user fees are a barrier to accessing care at the primary care level and thereby cause late detection of illness, poorer health outcomes and greater pressures on the acute hospital and long-term care systems”.

So what’s the problem? The problem is that free GP care isn’t a cut. It doesn’t hurt anybody – it actually makes life better, especially for people in the “squeezed middle”. It doesn’t look “tough”.

And this is what we’ve come down to: in the perversely sadistic mindset of the austerity hawks, it’s only fiscally responsible if it’s causing pain to ordinary people.