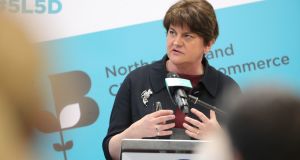 DUP leader Arlene Foster: ‘We’re determined to have that effective functioning government at Stormont because we know that NI works best when we work together.’ Photograph: Northern Ireland Chamber of Commerce and Industry/PA Wire

The DUP leader, Arlene Foster, has told business leaders in Belfast that she wants to see the return of a “rejuvenated, re-energised” Assembly and Executive in Northern Ireland.

She told the approximately 100 people present that she shared their frustrations at the continued lack of a devolved government in Northern Ireland, and said she reinforced “our commitment and desire here again today to form an Executive and to start making progress.”

The North’s power-sharing government at Stormont collapsed in January 2017 following a row over a botched renewable heating scheme. Fresh talks aimed at restoring the Assembly will begin on December 16th.

In her speech, which centred around her plans to boost jobs, business growth and the economy, she spoke to create a “high value and high productivity economy” which would benefit from the mix of large international corporations and strong indigenous small and medium size sector in Northern Ireland.

Questioned by some of those present on the details of what the DUP will do to ensure the devolved government is restored, Mrs Foster rejected the charge from one businessman that talk of being “determined and committed” was “all a lot of rhetoric”.

Instead, she said she felt there was a “willingness” and that “all parties are being told on the doorsteps that the most important thing is to get the Assembly up and running again so that we can deal with health and we can deal with education.

“That is my commitment to you, that I want to get the assembly up and running again, but I can’t do it on my own.

“I hope that after this election is out of the way we can get going and get the Assembly up and running again because that’s what people want,” she said.

During her speech, she acknowledged that “too many fear that the peace process has stalled, that we’re heading in the wrong direction.

“Taking decisions locally undoubtedly helps with the bread and butter issues but it also provides a vital stability here in Northern Ireland to deal with all those other very important issues.

“It bolsters the peace, it strengthens relationships and that’s good for Northern Ireland.

“In case there was any doubt, I want to see the Assembly and the Executive rejuvenated, re-energised, come back again.

“We’re determined to have that effective functioning government at Stormont because we know that NI works best when we work together.”

Mrs Foster also said that she believed that after next week’s general election that there would still be an opportunity for the DUP to have “significant influence” in Westminster, and that is was also in their interest to see that Brexit is “satisfactorily resolved and in a manner that best suits Northern Ireland.

“It suits no one, not even companies in the Republic of Ireland, to have barriers to business across the Irish Sea, so we will continue to work and to try and get a sensible Brexit deal, but it cannot introduce unacceptable impediments to trade across the Irish Sea,” she said.