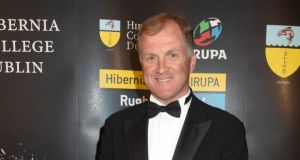 Huge MacNeill has also chaired The Ireland Funds, the British Irish Association as well as the aid agency, GOAL.

Former Irish international rugby player Hugo MacNeill has announced he will be a candidate for the three-seat University of Dublin panel in the Seanad elections.

Mr MacNeill, has also chaired The Ireland Funds, the British Irish Association as well as the aid agency, GOAL.

During a decorated rugby career, Mr MacNeill (61) played for Leinster, Ireland and the British and Irish Lions during the 1980s. He won 37 caps for Ireland between 1981 and 1988, as full back. He was a member of the team, captained by Ciarán Fitzgerald that won the Triple Crown in 1982, and again in 1985.

He also played soccer at a high level, being a member of the TCD team that won the Collingwood Cup in 1979.

MacNeill studied economics at TCD and did a post-graduate degree in Oxford University. He spent much of his career as a banker, working with Goldman Sachs. In recent years, he has been heavily involved with an initiative in Trinity College that encourages people with intellectual disabilities to go on to third level education.

Speaking to The Irish Times, Mr MacNeill said he had always been interested in politics but that his involvement with the TCD centre for people with intellectual difficulties, in addition to his work over 30 years promoting peace and reconciliation in Northern Ireland, had spurred his interest.

“The centre for intellectual disability (ID) is a legacy of the Special Olympics. Until now there has been a tiny percentage of people with ID who have gone onto 3rd level (only 44 out of a total population of 55,000).

“It is a two year course and we have placed them into leading Irish companies for internships and work experience. We have gone from four business partners to over 30. It has been a transformational experience.”

“This is an area where Ireland is leading the world and we want to spread it around the world,” said Mr MacNeill.

He said he is standing in the Seanad elections because of his passion for politics, and the causes in which he is involved. He said the Upper House will give him a bigger platform to more more involved.

Mr MacNeill is married to Jennifer Carroll MacNeill who was elected as a Fine Gael TD for Dun Laoghaire on February 8th. He said, however, he has never been a member of a party and will stand and remain as an independent senator, if elected.

“As chair of the British-Irish Association it was important that I was impartial and unaligned politically,” he said.

The three outgoing senators on the University of Dublin panel are Senator Lynn Ruane, Senator Ivana Bacik, and Senator David Norris. Ms Ruane was elected to the Seanad for the first time in 2016, after defeating Professor Sean Barrett .

In total ten candidates are contesting the Trinity College Dublin panel. Tom Clonan, an academic, carer and disability activist, is among those running as is Green Party councillor William Priestley.

Former Solidarity TD Ruth Coppinger, who lost her seat in the Dublin West constituency in the recent general election, is seeking a Seanad seat on the National University of Ireland (NUI) panel.

Commenting on her decision to run for the Upper House, Ms Coppinger said she hoped to use the Seanad “to further articulate socialist ideas in the interests of workers, women and the planet”.

There are 19 candidates contesting the NUI panel, significantly less than the 30 who ran for the three available seats in 2016.

The three senators elected in that race, Ronan Mullen, senior counsel Michael McDowell, and Alice-Mary Higgins, are all standing to retain their seats. Ms Higgins unsuccessfully ran for a seat in the European Parliament in the Dublin constituency last year.

Mr Mullen, a senator since 2007, topped the poll during the previous NUI panel election with 7,362 first preference votes, followed by Mr McDowell on 5,661 votes.

Former Union of Students in Ireland (USI) president Laura Harmon, who works with the National Women’s Council of Ireland, is contesting the Seanad race for a second time.

Candidate for the National University of Ireland panel: