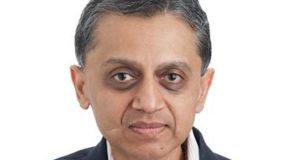 Former IMF mission chief for Ireland Ashoka Mody, says he believes bondholders should have been burnt, be they lenders to the Irish banks or the State.

It was a day after the bailout was concluded and Mody returned to the Merrion Hotel in the city centre where he met the then minister for finance Brian Lenihan in the lobby. They agreed to have lunch the following day.

Mody knew Lenihan was suffering from cancer. The Indian- born IMF economist had a book by Bohemian-Austrian poet Rainer Maria Rilke with him at the time.

He read Lenihan a poem about how wonderful life is and that, when facing death, a person should not be afraid but should rejoice in life.

“I looked at Brian and his expression was, ‘what was the punchline’?” said Mody. “Brian always knew it – it was how he operated. I saw it in action. Knowing he was going to die, he put his heart and mind to work in a way that was just stunning. It is a memory that will always stay with me.”

Three years on, speaking after another heavy snowfall, this time outside his office at Princeton University in New Jersey, Mody, now retired from the IMF, is not nearly as complimentary about how the European authorities dealt with the Irish crisis or their prospects for kickstarting economic growth.

Instead of “muddling through” the crisis, he believes the European authorities, his former partners in the troika while working as a senior IMF official in Washington, have become stuck in a “muddle”.

Europe’s aggressive, single- minded focus on austerity by way of sharp tax increases and deep spending cuts at the expense of measures that might encourage economic growth in a programme of sharp fiscal consolidation was “analytically, practically and institutionally wrong,” said Mody.

The fundamental error was in the European authorities taking the view that if you do not aggressively consolidate you will be seen to be “fiscally profligate” losing you vital fiscal credibility, he said.

The argument that the financial markets would have been scared if Ireland did not continuing cutting and taxing its way out of the crisis was “completely wrong”.

Markets could have been trained to think that it was good both ways. “In the end when they do not see growth, they get as scared as when they don’t see consolidation,” said Mody.

He believes another error was not burning bondholders, be they lenders to the Irish banks or the State, because a system of orderly debt restructuring – write-offs – is fundamental to the integrity of the euro zone.

“If that system is not an integral part of Europe, I think Europe is tying its hands in a very deep economic way with enormous social repercussions,” he said. Mody argues that Ireland could have been “more pushy” with the European Commission and the European Central Bank in arguing for less austerity and more measures to stimulate growth.

“Ireland had the basis for showing some leadership in Europe and that basis for that leadership would have been to say, ‘look, there’s more than one way of doing this and for our sake and for Europe’s sake, let us show you that way to do it’,” he said.

The economics professor says he has never fully understood the response of the Irish authorities when they question how they could have pressed a harder case with the European authorities.

Mody believes the Irish authorities weren’t helpless to accept Europe’s austerity approach and he keeps coming back to the idea that the Irish government “bought into some of that suffering”.

“If Ireland said, ‘you know we really need to do this because we think it is an economically sensible thing to do,’ what exactly was the alternate position of the European authorities?

“Would they have said, ‘in that case we are going to let you sink’?” he asked.

“I think Ireland held a very good position and that position became stronger over time as Ireland did the first several rounds of what was essentially consistent with the European framework.”

As to whether he was pushy in challenging the strategy of his European troika partners if he believed it was wrong, Mody declines to comment citing the confidentiality rules guarding internal negotiations.

Mody is not hopeful for Ireland’s future economic growth.

“It is unreasonable to expect Ireland to grow at more than 2 per cent a year, he said, and the fact that the “bounce-back” from a deep recession is taking so long to occur “implies that the long-term growth prospects have weakened”.

“It is not clear how Ireland is going to bounce back into any reasonable growth for a period of time,” he said.

Ireland may be emerging from the bailout programme this weekend but the legacy of the crisis remains, he says.

Public debt and unemployment, particularly among the youth are still high.

To be hopeful about the future would require a much more ambitious policy direction from Europe beyond austerity.

“This is a crisis in as much as because there are no clear answers and . . . no system within which to think of more ambitious and more radical ways of altering that trajectory, that dynamic,” he said.

“There is a crisis because it will come to be accepted as the norm and therefore something that the country has to live with, and that will be the tragedy.”